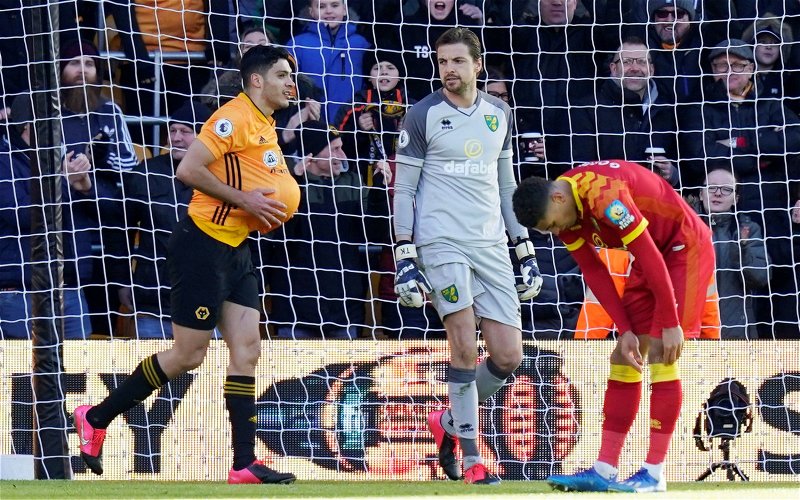 The discussion came after quotes recently emerged from a recent interview the Mexican frontman had with Jessica Coch, as cited by Bolavip, in which he reportedly said that it was “incredible” to be linked with big-name clubs.

Jimenez’s quotes were then picked up by The Mirror, which reported that the 29-year-old had ‘dropped his biggest hint yet that he’s ready to move’ away from Molineux.

So, on the latest episode of the E&S Wolves podcast, Judah and Edwards discussed the transfer talk surrounding the striker.

Judah said: “These things are going to happen and they’re going to happen more regularly because the summer transfer window is going to open up sooner rather than later, this [season] is all going to be finished in six weeks’ time.

“Not to say that there’s no smoke without fire, but at the same time, good players playing in good teams that so-called bigger teams might target and thinking: ‘We can get someone here’. It’s just two plus two equals four isn’t it, really? It’s an easy story to write.”

“Reports from reputable places kind of tricking people and thinking: ‘Oh well, The Mirror’s reporting it or The Times are reporting’ or whatever, but they’re actually according to Tutto[Juve].”

It would seem that the journalists did somewhat pour cold water on the transfer links surrounding Jimenez, however, Judah did admit that there is “no smoke without fire”.

Should Wolves end up selling Jimenez in the summer transfer window, it would be quite the loss as he has been the Old Gold’s second-best performer in the Premier League this season with a 7.34/10 average rating (per WhoScored), as well as their top scorer.