Journalist Alasdair Gold has provided some insight into the situation of Tanguy Ndombele at Tottenham Hotspur.

Gold recently posted a video on his YouTube channel and while he talked about many things, Ndombele was a topic that he focused on. The journalist revealed that Spurs boss Jose Mourinho is trying to get the most out of the Frenchman.

Ndombele is yet to take part in Premier League action since football restarted and was on the bench against both Manchester United and West Ham United. Mourinho had criticised the Frenchman for his performance at Turf Moor against Burnley earlier in the season, which was Tottenham’s most recent league game prior to the season’s shutdown. Meanwhile, recent reports have linked Ndombele with a move to Barcelona, putting his future in doubt.

While talking about Ndombele’s situation at Tottenham, Gold said: “I don’t think there’s a frustration at Spurs, I said this months ago. Mourinho clearly is trying with the player – he went over to his house, did all this work with him, which he shouldn’t have really done. This is not a guy that has just ostracised and exiled this guy and said ‘Look, you’re not for me’. He is a guy who is clearly trying to work quite hard with this guy and demand the very most out of him.

Do you think Ndombele is done at Tottenham? 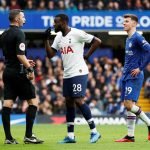 “And at the moment, he’s not quite deserving of starting in that first eleven. Does that mean you immediately look for other things? People within Spurs and around Mourinho do believe that the people around Ndombele are trying to push him towards the exit. Let’s hope they’re not.

“This guy has the potential to be one of the most gifted players in the Premier League. He is sensational – but he has to work within the team fabric.”

Going by what Gold has to say, Ndombele’s entourage is trying to push him towards a Spurs exit and it is thought that is what people at Spurs believe as well. At the same time, Gold feels that Ndombele is a hugely talented player.

Despite all the controversy around him, Ndombele did manage to earn a WhoScored rating of 7.34/10 in the Champions League for Spurs. Even in the Premier League, he has notched up a pretty respectable 6.76 rating in what is his debut campaign, while he’s already contributed to six goals in all competitions, with four of those being assists (via WhoScored).

Clearly, the ability is there in him. As per an article that David Hytner wrote for The Guardian, Ndombele has previously had issues about his work-rate and consistency, while he has also been rejected by clubs in the past for not having the right ‘build’. The article says that he was slightly ‘overweight’ during his time at Guingamp.

Judging by what Gold says, these problems could now be cropping up at Spurs. The talent that Ndombele has is too good to be squandered and Gold does mention how good he can be.

Spurs have already taken a big loan from the Bank of England to tide over the financial risks that the pandemic poses, so they can seldom afford to waste money, including the £55.45 million that they spent on Ndombele. Something needs to be done to get the player’s Spurs career on track.