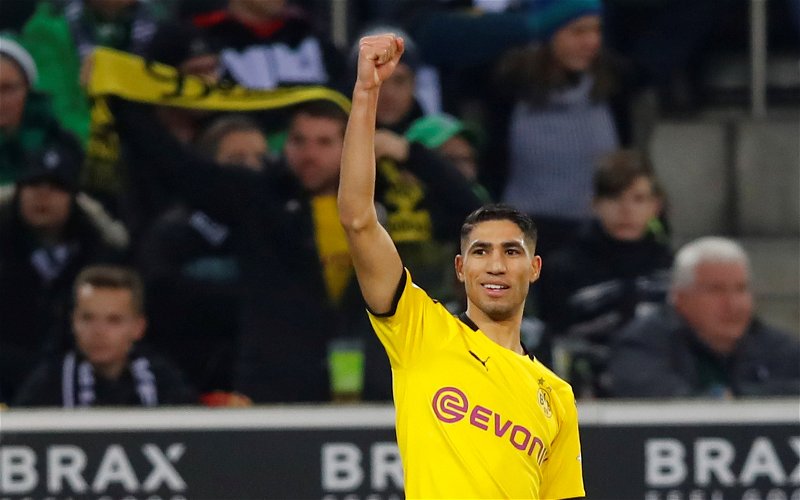 According to recent reports in Cadena SER, Manchester City made enquiries with a view to signing Real Madrid right-back Achraf Hakimi.

The report suggests that the defender, who is currently on loan at German side Borussia Dortmund, is wanted by several clubs, however, City are leading the way for the 21-year-old’s signature, having enquired with his parent club about how much they would want for the Morocco international – which is believed to be in the region of €60m (£53.8m).

However, the report goes on to claim that a move by City for Hakimi is dependent on the results of their recent hearing with CAS, which will determine whether the club’s two-year ban from European football will be upheld. City are in danger of being expelled from continental competitions by UEFA after the governing body found that City had broken FFP rules, as well as deliberately misleading their investigations into the club’s finances.

It is easy to see why City are interested in the £48.6m-rated 21-year-old, as the right-back has been in marvellous form in his second campaign at Dortmund, scoring five goals and providing 10 assists over his 31 Bundesliga appearances, averaging a highly impressive WhoScored match rating of 7.36/10.

In addition to this, the defender has also excelled in the Champions League this year for Dortmund, scoring four goals in eight appearances, averaging an even more impressive match rating of 7.43.

Would you like to see City make a move for Hakimi this summer?

As such, it is evident that Hakimi would be a magnificent coup for City. However, with so much uncertainty surrounding the club’s short-term future in regards to playing Champions League football, it could be argued that City may not be the most attractive destination to a player who has shown that he can perform at the very highest level of football that Europe has to offer.