Crystal Palace boss Roy Hodgson has said as far as he is concerned, Lyon’s reported interest in Mamadou Sakho doesn’t exist. The French club’s president Jean-Michel Aulas confirmed the former Liverpool defender was a summer transfer target for the Ligue 1 outfit and recent reports in France suggested negotiations were at an advanced stage (as per the Daily Star).

Hodgson told the media: “Well, as far as I know, our club hasn’t had any contact with Lyon at all.”

“Until such time as the president of Lyon contacts chairman Steve Parish or director of football Dougie Freedman and starts discussing the options and the possibility of Mamadou Sakho joining Lyon, as far as I’m concerned that interest doesn’t exist. It’s just talk. We’ve had no concrete dealings with Lyon at all.”

Would you consider selling Sakho this summer? 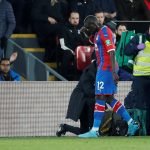 Sakho has struggled with injuries this season and hasn’t featured in the Premier League for the Eagles since their 1-1 draw with Norwich City on New Year’s Day (as per Transfermarkt.co.uk). He’s made just eight appearances for Hodgson’s side since the start of the campaign but he is back fit again and according to the boss, the player has used the lockdown period to “work hard on his general fitness”.

Sakho is being linked with a move back to his native France and according to Transfermarkt.co.uk, he is currently valued at £8.55m. The Eagles paid in excess of £25m to bring the player to Selhurst Park from Liverpool and in our view, it’s unlikely they will recuperate anything like the fee they paid back in 2017.

However, given his injury troubles and the fact his contract is due to expire at the end of next season, if a respectable offer is tabled, we believe Palace would be wise to consider it.