Arsenal: James McNicholas shares his view on the future of Konstantinos Mavropanos | thisisfutbol.com

Arsenal: James McNicholas shares his view on the future of Konstantinos Mavropanos

The Athletic’s James McNicholas has been discussing the future of Arsenal defender Konstantinos Mavropanos. The 22-year-old defender signed for the club in January 2018 from Greek club PAS Giannina for a reported fee of £1.89m (via Transfermarkt.co.uk).

The centre-back has made just eight appearances for the first team since his arrival and was sent out on loan earlier this year to German second-tier club FC Nuremberg. Mavropanos has played on 11 occasions for the German side, picking up four yellow cards (as per Transfermarkt.co.uk).

He made his first-team debut for the Gunners in Arsene Wenger’s final trip to Old Trafford as the Arsenal boss and impressed instantly, picking up a player rating of 8/10 according to the Express for his performance that day. However, just a couple of fixtures later, he was sent off at Leicester City in a 3-1 defeat and since then, opportunities for the centre-back have been few and far between.

When asked his view on the player and what the future might hold for him on the Arsecast Extra, McNicholas said: “There’s been little bits of transfer suggestion that other clubs are looking at him. That strikes me as an agent thinking ‘maybe I need to think about the exit strategy or what is next for him’.

“I find it very hard to believe he is coming back to Arsenal to be a major player.”

Does Mavropanos have a future at Arsenal? 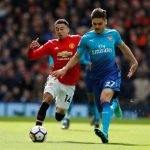 Mavropanos’ average performance rating since moving to Germany stands at 7.29/10 according to WhoScored.com which evidences the fact he has settled into life at Nuremberg well.

McNicholas appears to believe Mavropanos’ representatives may be trying to put things in motion behind the scenes to get their client out of the club in search of regular football. Given that the Greek may have to compete with David Luiz, Shkodran Mustafi, William Saliba, Pablo Mari, Sokratis and Rob Holding – moving on may be the best thing for both the club and the player.