Some Celtic fans have been talking about the latest tweet that their former player Didier Agathe recently posted.

Agathe’s latest tweet thanked Celtic fans for wishing him well in his new journey with Durham City, where he was appointed manager in recent weeks. Agathe also hailed Neil Lennon for helping the club win the Premiership title and said that he is looking forward to making a visit to Celtic Park.

Many Celtic fans flocked to this tweet. They hailed Agathe, while others offered their best wishes ahead of his managerial tenure at Durham City.

Get in! The most underrated player in Celtic’s History. Legend pal!

Will Agathe ever re-join Celtic as a coach? 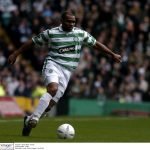 He's not coming back

Best of luck at Durham City. Loved watching you in the hoops! ???

Good luck ? Didier, I wish you every success, you deserve it ???

Didier you were a joy to watch for Celtic… I hope you can bring the same success to @DurhamCity_AFC and I will be watching out for their scores ?

Good luck in your new job

Agathe was at Parkhead for five years, joining the club from Hibernian in 2001 before leaving in the winter of 2006. He later joined Aston Villa the following summer. Prior to joining Celtic, Agathe had spells at Raith Rovers and Montpellier (via Transfermarkt).

Many Celtic fans seem to have a lot of liking for Agathe. Considering how he won three Premiership titles at Parkhead, it is a reflection of how he was an important player for the Hoops.

With the player now the new manager at Durham City, it is pleasing to see the Celtic fans wishing him well for his new role.