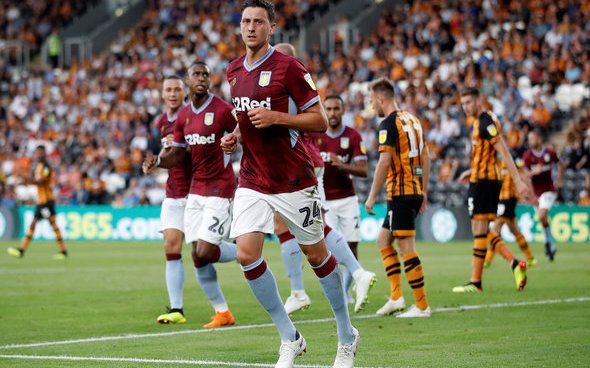 This comes after the Villa journalist shared a post on his official Twitter page that contained an article for The Athletic that included an interview with former Villa player Tommy Elphick.

In the interview, Elphick reveals that Tony Xia lured him to his office with a promise of a present only to reveal that he wanted to sack then-Villa manager Roberto Di Matteo.

This post then gathered a lot of replies from Villa fans who were quick to share their thoughts on Elphick.

Ex- #AVFC captain reveals Tony Xia lured him to his office with a promise of a (fake) present only to reveal that he wanted to sack Roberto Di Matteo!https://t.co/Pp9gxuC58f

Think every Villa fan holds Tommy in very high regard hence the furore when he was loaned out and the welcome he received when he came back ??

Fantastic professional. I’m certainly grateful to him for his important service #AVFC

Always had huge time for Tommy Elphick. Proper sort. If we’d have had more of him we wouldn’t have been left in the position we were.

Elphick was one of those players who no matter what I always wanted it to work for him at villa. One of the most honest players at the club in recent years, it’s a shame it didn’t go exactly to plan.

Did Villa make a mistake letting Elphick leave the club?

The Englishman first signed to the club back in 2016 from Bournemouth but after numerous loan deals, Elphick finally left the club on a free transfer to Huddersfield Town last summer (per Transfermarkt).

Now that Elphick shared this revelation surrounding his meeting with Xia, it certainly shocked a number of Villa fans.

Unbelievable!!! What a mess. I don’t understand why managers can’t be straight with players and just say you can leave.

These Villa fans certainly have fond memories of Elphick and his time at Villa. As for his strange meeting with Xia, it comes as no surprise that these Villa fans found it odd.