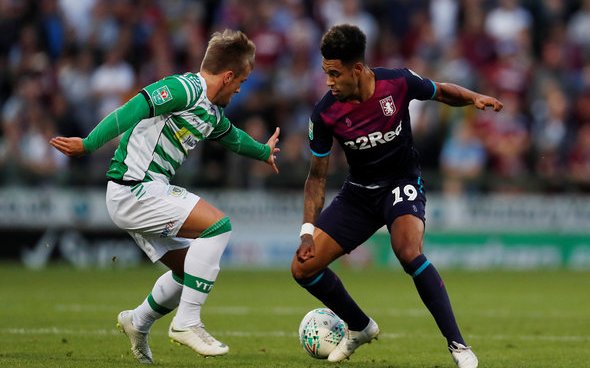 Aston Villa fans on Twitter have been responding to the latest social media post from Villa winger Andre Green.

This comes after the Englishman shared a post on his official Twitter page that contained an image of himself following Villa’s Championship Play-Off final victory against Derby County at Wembley last season.

Green captioned his post claiming that this was his “best moment in a Villa shirt” before adding a purple love-heart emoji to represent Villa’s claret club colour.

Be good to see you back in the claret/blue soon #utv #partofthepride ?

When you coming back then??

Hope to see more of you in a villa shirt soon! Come back stronger ???

Hope to see you have many more great moments in the Claret and Blue.

Does Andre Green have a future at Villa Park?

Make sure it’s not your last??

Hopefully not your last

It’s great to see Green, who is valued at £1.62 million (as per Transfermarkt), recognising and celebrating not only one of the best moments in his own career but also one of Villa’s best achievements in recent years. The response to Green’s post from this bunch of Villa fans just goes to show that they hope to see the winger enjoy more moments of victory for the Birmingham club in the future.