Some Celtic fans have been raving at the latest video involving Odsonne Edouard that has gone viral on social media.

The Hoops’ Twitter account recently posted a video of Edouard’s goal in the Old Firm derby back in March 2019. The Frenchman received the ball close to the halfway line and scored after dribbling into the box before a terrific, composed effort put Celtic ahead in the tie.

Upon seeing this video, many Celtic fans were left raving. They hailed Edouard and his strike, while some of them hailed the pass from James Forrest that set Edouard up.

What a day that was pic.twitter.com/8L13VTqU3a

Can we get a compilation video of all the goals he has scored against them please admin, to cure this boredom

Some first time ball from Forrest for Eddies goal ?

Can Edouard be a better player than Dembele?

Dembele will always be better 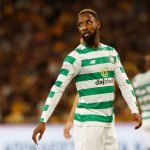 Edouard will be better

@CiaranCasey16 i hate forrest but his pass there is underrated

That ball from Forrest but

The game in question was played on 31st March 2019, with Celtic emerging victorious by 2-1 margin at Parkhead. Edouard’s goal had handed the Hoops the lead, though Ryan Kent equalised for the Gers in the second half, before Forrest managed to grab a late winner in the 86th minute.

The strike against Rangers was only one of the goals that Edouard has scored against Celtic’s arch-rivals. The Frenchman has played nine Old Firm games and has scored six times.

This shows what an important player he is in Old Firm derbies, and could be one of the reasons why Celtic fans love him.