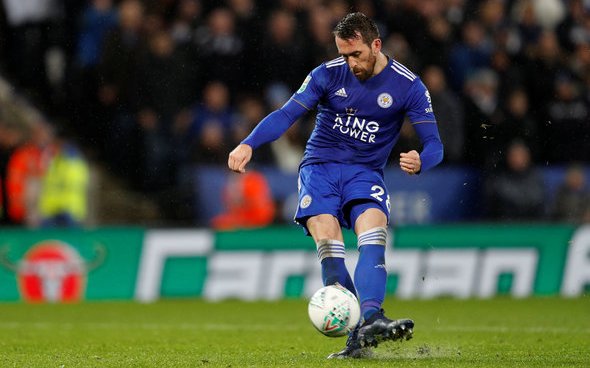 Some Leicester City supporters have flocked to a tweet that was recently posted by Foxes left-back Christian Fuchs which features footage of the 33-year-old Austrian performing what he describes as an “improvised” home workout.

Fuchs’ recent tweet shares footage of himself walking up a set of stairs while repeatedly pressing a wooden chair over his head. After reaching the top of the stairs, Fuchs then performs some squats while still holding his chair above his head.

This tweet has caught the attention of some Foxes supporters, with one Leicester City fan even asking the left-back if he is selling any “training tips” in response to this footage. Read the responses of some Leicester supporters to Fuchs’ recent post in the tweets below.

Do you sell those training tips?!

Your not squatting low enough Christian in order to work your quads!!?

Brilliant improvisation love it … but need to go little lower on the squat as looks like you cheated ???

Due to the current viral outbreak, gyms across the UK have been ordered to close “for the foreseeable future”, as reported by Sky News. As a result, many people may be performing some home workouts at present, which may help them to relate to Fuchs’ recent “improvised” home workout footage.

The current viral outbreak has also caused a halt to professional football in England, which is set to remain postponed “until at least 30 April”, as reported by the BBC. As a result of the current postponement of professional football in England, it may be understandable why some Foxes fans may be pleased to see this footage featuring one of their club’s players, while they are currently unable to watch him and their team on the pitch.