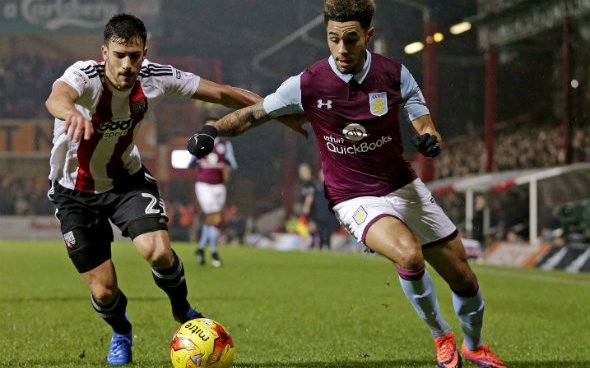 Aston Villa fans on Twitter have been discussing Andre Green’s future at the Birmingham club.

This comes after Villa news Twitter account @AVFC_News shared a post on their page asking their followers if they think Green should be given a new contract at the club.

This post then gathered a number of replies from Villa fans who do not think Green should get a new deal at Villa Park.

Should Andre Green be given a new contract? #avfc #cafc https://t.co/aHSFizvMED

No league 1 player at best

i really like Green and so this hurts a little but i think its in everyone’s interest – particularly his – to not renew. He needs regular games at this stage and we can’t offer that. wish him all the best whatever happens however – seems a good kid.

If Villa were to get relegated, would Andre Green make the squad?

The Englishman is currently on a loan deal at Charlton Athletic after spending the first half of the season on loan at Preston North End (per Transfermarkt). Since arriving at Charlton, Green has gone on to score two goals and provide one assist in 11 appearances for the Championship club. Now that the question has been put to these Villa fans on whether or not Green should continue as a Villa player or not, this has given lots of Villa fans the opportunity to share their opinions on what should happen to the winger.

Hasn’t kicked on anywhere near what he should have. Injuries have not helped. Needs a good move to start his career again.

I like him but no his not good enough

Unfortunately for Green, who is valued at £1.8 million (as per Transfermarkt), it seems that these Villa fans don’t see a future at the club for the 21-year-old.