Sheffield Wednesday: Fans react to Carlos Carvalhal’s comments claiming that he will return to the club “one day”

Some Sheffield Wednesday fans have been reacting negatively to ex-manager Carlos Carvalhal’s recent claim that he will return to the club “one day”.

Carvalhal was the Owls’ manager from July 2015 until December 2017, when he left the club by mutual consent. Carvalhal left Wednesday sitting in 15th place in the Championship table, 11 points off sixth-placed Aston Villa in the play-off places.

During a recent Q&A on Twitter, one Owls fan asked the club’s former boss if he would return to Wednesday in the future, which the 54-year-old responded to by stating that he will “one day, of course”. Owls-focused Twitter account @LiveSwfc shared Carvalhal’s comments via a tweet of their own, which subsequently got some Wednesday fans talking, with many declaring that they would not want the Portuguese coach to return to Hillsborough.

Read the negative reactions of some Wednesday fans to the thought of Carvalhal returning to manage the club once again in the tweets below.

"One day I will return" – Would you want him to, #swfc fans?https://t.co/rDjcbkaNm2

No, need to move forwards not backwards

Would you like to see Carlos Carvalhal return to Sheffield Wednesday?

YES, CARVALHAL IS A GREAT MANAGER 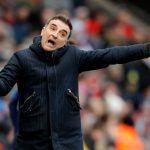 NO, WEDNESDAY NEED TO LOOK TO THE FUTURE, NOT THE PAST

Despite leaving the Owls in the bottom half of the table, Carvalhal guided Wednesday to the Championship play-offs in both of the two seasons that he completed as manager of the club.

The Portuguese coach secured a sixth-placed finish in his first season as manager, which was the highest league finish that Wednesday had achieved since being relegated from the Premier League in the 1999/00 season. He subsequently improved on that performance by guiding the Owls to fourth place in the following season.

Considering that he managed to guide the Owls to the play-offs in both of his two full seasons at Hillsborough, it may be slightly harsh for some Owls fans to share such a negative reaction to the Portuguese manager’s claim that he will return to the club in the future.