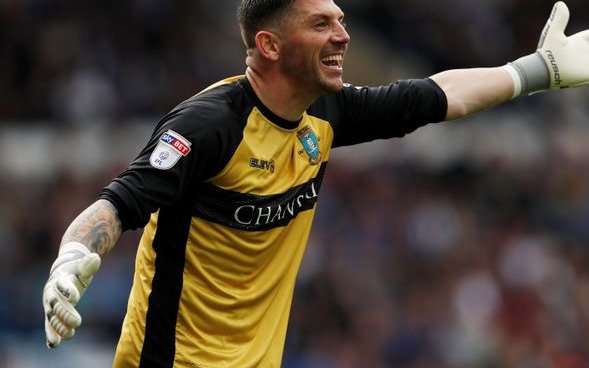 Some Sheffield Wednesday fans have been reacting to a tweet that was recently posted by the Star’s Wednesday-focused Twitter account, @TheStarOwls, which shares a recent article questioning whether 35-year-old goalkeeper Keiren Westwood will “ever play another Owls game”.

The Star’s article looks at the current relationship between Westwood and Wednesday manager Garry Monk, stating that the 35-year-old may have played his last game for the Owls with Monk in charge, explaining that Westwood “is understood to be training with the under-23s” at present, having not featured in a Championship game for Wednesday since their 2-1 defeat to West Brom on the 23rd of November.

Read the reactions of some Owls fans to the recent speculation around Westwood’s future at the club in the tweets below.

Will Keiren Westwood ever play for Sheffield Wednesday again?#SWFC https://t.co/okruQxiBWx

I hope so @WestwoodKeiren He’s still our number one and I for one, am heartbroken

Not while monk is there

Regrettably no, certainly while Monk is in charge.

Monk out ! Hutchison & Westwood back please

Sack monk then bring Westy back and Hutchinson back too

However, WhoScored have rated Westwood higher than Wednesday goalkeeper Cameron Dawson, who has earned an average overall rating of just 6.24 from his 24 Championship appearances this season according to WhoScored. Westwood and Dawson are currently the only two goalkeepers who have featured for the Owls in the Championship this season according to WhoScored.

While Westwood may not have been one of Wednesday’s best players this season, he might have delivered some more positive performances than the 24-year-old goalkeeper who has started all of the Owls’ Championship games since their 1-1 draw with Birmingham City on the 27th of November. With that in mind, it may be understandable why some Wednesday fans may not be happy to see Westwood remain absent from the squad at present.