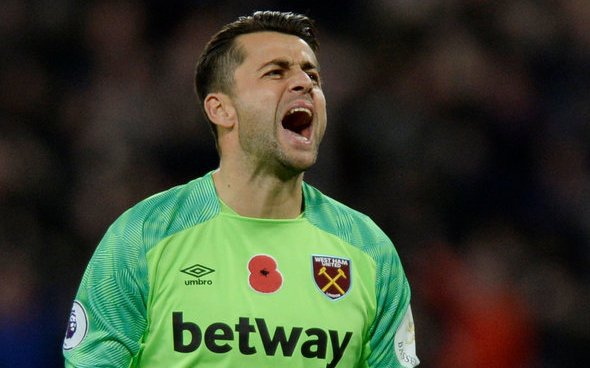 Supporters of West Ham United have been discussing Lukasz Fabianski’s contract on social media after a report on the Polish stopper.

According to Claret and Hugh, while the 34-year-old’s contract is set to expire in June, there is an option in place for a year extension (via West Ham News), which had fans discussing the goalkeeper’s contract.

Lukasz Fabianski’s contract runs out in June ’21 but CandH he has a further year’s option which would take him to the age of 36.

At that stage the Hammers would hope that on loan youngster Nathan Trott or Joseph Anang maybe ready to step up.

Hopefully he will want to renew.

What a slow sports news period war are in!

The report also stated that when the year-long extension to Fabianski’s contract will be up, the club is hoping that Nathan Trott or Joseph Anang is ready to take his spot in goal.

This season, the 34-year-old has been the Hammers’ 13th-best performer in the Premier League with a respectable 6.64/10 average rating (per WhoScored).

Irrespective of when current contracts are set to run out, West Ham need to do everything possible to keep hold of Fabianski as first choice goalkeeper at the club for as long as possible. Our best goalkeeper in recent times and a bargain for the initial £8m transfer fee paid.

Far to much “hope” attached to our future planning. Fanianski was on fire before the injury but is has been dodgy since & Trott/Anang are unlikely to make the grade. We should be looking for good competition/replacement for Fab this summer.

The stopper has made only 16 appearances in the Premier League so far this term, during which he has kept five clean sheets and conceded 22 in the 11 games he has not (per Trnasfermarkt).

It seems as if the majority of West Ham supporters seem keen for the ‘keeper to stay at the London Stadium, although a few do have their doubts.