Football London’s Tottenham Hotspur correspondent Alasdair Gold has had his say on Jack Roles in a recent question and answers session with some of the supporters.

Gold was asked: “Do you think Jack Roles has a chance to break into the first team any time soon, maybe to help fill the void in creative attacking midfield left by Eriksen?”

To which he responded: ‘I think at 21-years-old now, Jack Roles’ next steps will be about continuing his progress up the football ladder. His loan at Cambridge United has been a massive success and he’s taken to senior football with aplomb. I’ve been fortunate enough to see a lot of him at U23 and U19 levels in recent years and it’s great to see him now succeeding in the men’s game.

Mourinho will no doubt have a look at him whenever the next pre-season comes, as Pochettino did last summer, but, for me, I think the young midfielder has a real chance now to build on what he’s done this season and work his way up the Football League.’

As previously mentioned, Roles currently represents Cambridge United in League Two. He is due to rejoin the North London club at the end of this season but upon his return, he will be entering his final year of contract as a Tottenham Hotspur player (via Transfermarkt.co.uk). And, he hasn’t yet appeared for the first-team.


A central-midfielder by trade, the Cyprus Under-21 international has contributed five goals in 23 league appearances this season. Prior to signing for the U’s, the right-footer played 32 times for the Under-23’s, scoring 12 goals and providing five assists.

Christian Eriksen left Spurs in January to sign for Inter in a deal reportedly worth £18m (via Transfermarkt.co.uk). The Danish international arrived in North London back in 2013 from Ajax and went on to represent the Lilywhites 305 times. He scored 69 goals and provided 89 assists.

In our view, talk of Roles breaking into the first-team squad next season feels premature considering he’s yet to make a senior appearance for Spurs. At present, the focus will be to secure a place in next season’s UEFA Champions League having reached the final last year with Jose Mourinho’s side currently seven points off of the fourth place.

Does Jack Roles have a future at Tottenham? 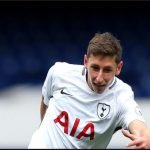 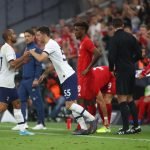 It’s unclear what the future holds for the young midfielder following the end of his current loan spell and whether or not it will be extended given the public health crisis that has seen English football suspended until at the earliest, 30 April.