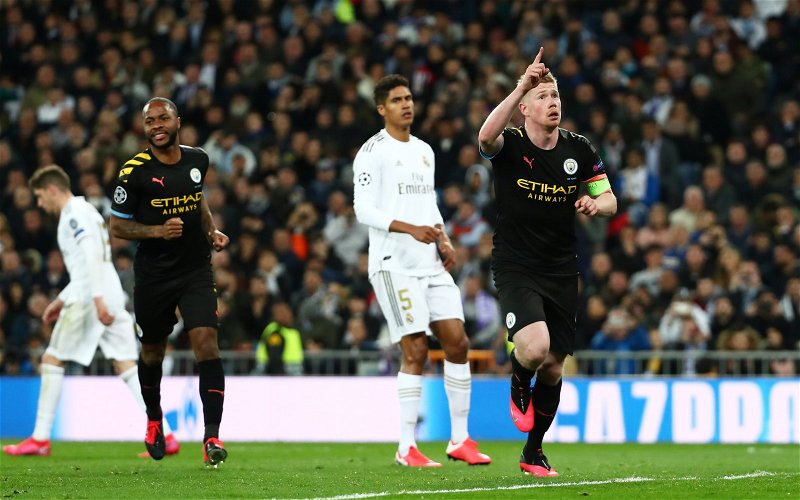 Fans of Manchester City have been reacting to a post by Man City Xtra on Twitter, which relays Pep Guardiola’s comments on Kevin De Bruyne, who the Spaniard claims is a doubt for City’s fixture against Manchester United this weekend, and potentially their Real Madrid tie later this month.

De Bruyne, who arrived at Manchester City from VfL Wolfsburg in 2015, has been in incredible form for the Citizens so far this season, scoring eight goals and providing 17 assists in his 26 Premier League appearances, as well as a further two assists and one goal in his five Champions League matches.

The 28-year-old has averaged a remarkable 7.92 WhoScored rating in the league for City, not only ranking him as the Citizens’ best performer so far this season, but also the Premier League’s.

As such, the £135 million-rated midfielder’s absence would be a massive blow for Pep Guardiola’s side, something that the 49-year-old fears may be the case this Sunday.

When discussing City’s Wednesday evening FA Cup victory over Sheffield Wednesday, Guardiola stated: “Kevin had a problem, he was not fit. He fell down in a bad position in his back. We don’t know how long (he will be out).”

When asked whether he thought the Belgian international would be fit for the Manchester derby this Sunday, Guardiola replied: “‘I don’t know right now.”

In reaction to the news, City fans have flocked to Twitter, with many stating their disappointment at the news, while others pleaded for their manager to rest the midfielder until they face Real Madrid later in the month.

Pep Guardiola has confirmed Kevin De Bruyne was not involved tonight after 'landing awkwardly' towards the end of Sunday's Carabao Cup final, and stated it's a 'back issue'.

Guardiola is unsure as to whether he'll be available for Man United on Sunday.

Just get him fine for Madrid

ARE YOU KIDDING ME ?? pic.twitter.com/LWYE3ir6qZ

Keep him fit for Madrid, no one cares about the league anymore

He better be fit!

Although it would be a blow for Pep Guardiola to lose a player as influential as Kevin De Bruyne for the Manchester United clash, the City boss would likely prefer that the Belgian is fit for City’s Champions League fixture against Real Madrid later this month.

City are currently 22 points behind runaway leaders Liverpool in the league table, meaning that is is unlikely that they will prioritise the league over European competition, especially as Pep Guardiola’s have an excellent chance of reaching the Champions League quarter-finals, having defeated Real Madrid 2-1 at the Santiago Bernabéu last month.