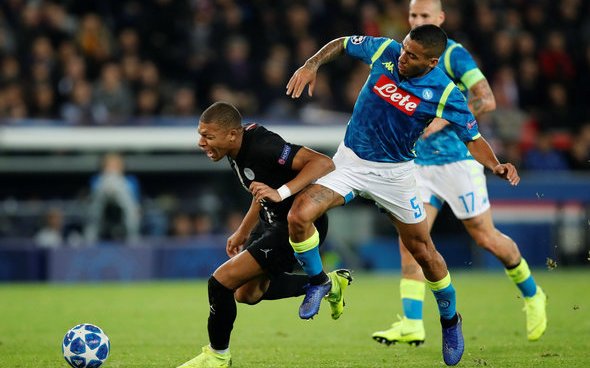 Supporters of Everton have been reacting to an update from Nicolo Schira on the transfer interest the Toffees have in Napoli’s Allan.

According to the journalist, the Toffees want to sign the Brazilian midfielder in the summer and are preparing an offer of €40 million (£36.4m) (per Nicolo Schira), which supporters reacted to.

#Everton want to sign #Allan in summer. #Toffees are working and are preparing an official offer (€40M) for #Napoli. For him is ready a contract until 2025 with a wages of €6M + bonuses a year. #transfers #EFC

Good player, but better out there! Over-rated & far too much! Sangare is better & at £17m a snip!

According to the tweet from the journalist, despite not having made a bid yet the Merseyside club has a contract ready for Allan until 2025 with wages of €6 million (£5.5m) plus bonuses a year (per Nicolo Schira).

Over 16 Serie A appearances so far this season, the 29-year-old midfielder has only been Napoli’s 13th-best performer, with a solid but slightly uninspiring average rating of 6.75/10 (per WhoScored).

Not if we get 2-3 solid seasons out of him and bulks players around him. Yes buy for the future, bought we are desperate to replace Gueye now not in the future! Instantly makes our team better! Could get that 40m+ back with a good cup run etc! 100% yes from me

The experienced Brazilian has a current market value of £36 million and has three seasons remaining on his contract following the conclusion of the current term (per Transfermarkt), so, €40 million (£36.4m) would be a solid deal if achievable.

However, Everton supporters appear to be a little divided over this one, with some feeling like the move would be good business and others not so much.