Sheffield Wednesday were held to a draw in the weekend’s South Yorkshire derby by Barnsley at Oakwell, despite Josh Windass firing the Owls in front after just 16 minutes. Garry Monk’s side were swiftly pegged back by a Cauley Woodrow goal and as a result, the points were shared.

The Wednesday boss selected Dutch midfielder Joey Pelupessy in his starting XI despite many fans feeling the 26-year-old simply isn’t good enough to play at Championship level. According to WhoScored.com, the player’s performance at the weekend was rated at 6.2/10 – making him the lowest-ranked outfield player among the Owls starters that day.

Is Joey Pelupessy good enough to play in the Championship? 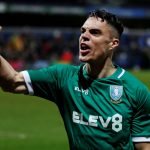 Here’s what the supporters have had to say regarding the former Heracles Almelo man:

Lowest number of touches of anyone on the pitch as well by a fair distance. This for me is why our ball retention is so bad, when one of your central midfielders makes 20-25 touches a game ?

We are going backwards with Monk, no play offs again,

Not a lover of the tackles stat. Eg Van Dyk doesn’t make many “tackles” it’s more about reading the game and good positioning

His job is literally to make interceptions, he’s a defensive midfielder.

I’ve said it for ages, none of his team mates want to give him the ball. He shows for it and they ignore him and look for Bannan instead.

The Dutchman, who is valued at £900k (as per Transfermarkt), has made just nine league appearances for the Owls this season and after his display at the weekend, we believe it is unlikely he will become a first-team regular anytime soon. The club paid £450k to bring the former FC Twente player to Hillsborough back in January 2018, but it is becoming clear the supporters don’t believe this was a smart piece of business.