On Wednesday Rangers managed to beat Braga to advance to the UEFA Europa League Round of 16. Rangers have drawn Bayer Leverkusen in the next round.

Steven Gerrard had to make a couple of slight adjustments from his first leg lineup, bringing in Florian Kamberi for the suspended Alfredo Morelos. However, one of the changes Gerrard made out of choice was to replace Nikola Katic, who started the first leg, for George Edmundson.

Katic was dropped after a horrific individual performance against St. Johnstone between the two legs. Kris Boyd called it the worst performance he has ever seen from a Rangers centre-half.

Who deserves to start with Connor Goldson? 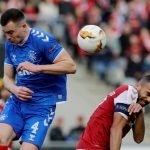 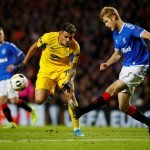 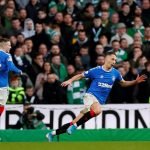 Edmundson was brought in for the trip to Portugal and earned himself an impressive 7.35/10 rating from WhoScored, helping lead his side to a clean sheet.

After the match Edmundson tweeted out to fans, claiming that he joined Rangers to experience matches like the one in Braga. They praised his performance, with one suggesting that the starting spot is his to lose.

Big George was excellent yesterday, Deserves to stay in the team based on his performances when picked this season.

Some fans called him a fridge in reference to his extreme physical presence on the field. Edmundson won three aerial duels during the match.

Haters will say its edited pic.twitter.com/KtmJU18Ofg

Connor Goldson has cemented himself as Gerrard’s first-choice centre-back, earning 47 appearances this season. This makes him Gerrard’s most capped player this season.

However, perhaps there is an opportunity for Edmundson, Gerrard’s fourth most-capped centre-back, to go on a run of starts. Edmundson has featured 11 times for Gerrard this season, behind Filip Helander with 17 appearances, and Katic with 28.