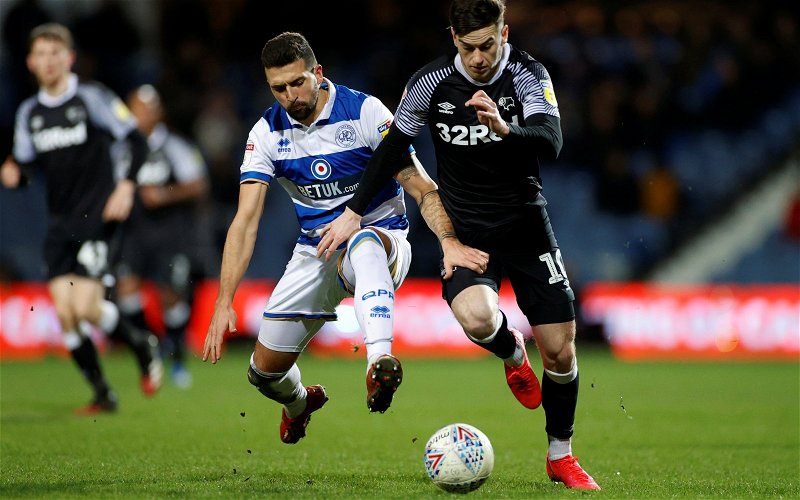 Fans of QPR have taken to social media in reaction to the Hoops’ 2-1 victory over Derby County on Tuesday evening.

QPR, who went into the game in 15th place in the Championship, had been in fine form over their last three matches, drawing away at Swansea 0-0, beating Stoke 4-2 at Loftus Road and drawing again at high-flying Nottingham Forest last weekend.

Having been in 17th place before this three-game unbeaten run, and just nine points above the relegation zone, QPR were looking for another positive result to all but confirm their place in the Championship for next season.

In order to do so, they would have to defeat Derby County, who had been on a run of their own, albeit of three games without a win.

Eventually, both sides’ current form would continue, as goals from QPR’s Grant Hall and Ilias Chair were enough to secure all three points at the Kiyan Prince Foundation Stadium, with the Hoops’ victory resulting in them leapfrogging their defeated opponents in the table, finishing the evening in 12th place, and now just 10 points adrift of the play-off places.

Although it may be too late for a promotion push, the result delighted QPR fans nonetheless, with many taking to social media to praise their side’s recent performance.

The defence has been immense tonight Warburton masterclass with the subs! Perfect timing and what a vital win 4 unbeaten!

Get in! We hang on and finish well. A great couple of saves from Liam Kelly and the defense scraps to the victory! Ilias Chair is the hero. 4 unbeaten, 2 wins now. Fantastic win. #QPR #COYRs ???

These two are something else?????? pic.twitter.com/XTFzkNq2dw

Mark Warburton and QPR have really turned things around of late, having started 2020 taking just six points from their first six matches of the new year.

However, since then, they have taken eight points from their last four games, and now find themselves closer to the play-off places rather than the relegation zone.