Some Celtic fans have been applauding the latest comments of Hoops left-back Greg Taylor in a recent interview.

The summer signing from Kilmarnock featured for the Hoops against Hearts, who took a 5-0 loss at the hands of Neil Lennon’s men. Ahead of the club’s Premiership game against Aberdeen, Taylor was talking to the club’s official website and he talked about how he wants to be a regular at Parkhead.

Can Taylor replace Tierney in the long-term?

Tierney will always be better 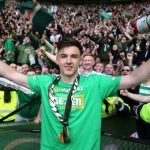 Taylor is much better

When the Hoops posted these comments on Twitter, it left many Celtic fans lauding what Taylor had to say. They’re optimistic about his future at the club.

Greg will be a great player for us. Looks comfortable in the jersey. Many never get there.

@GregGregtaylor you were fantastic last night and have been getting better every game.

Great future ahead of you at celtic Greg HH

Your doing a terrific job

Of course you can ,got my vote.

Taylor joined Celtic from Kilmarnock in the summer, with former left-back Kieran Tierney departing to Arsenal for a fee of £25 million.

So far this season, the Scotland international has made 15 appearances in all competitions. He has picked up four assists, with two coming against Hearts at the weekend. He has already made three appearances for the Scottish national team, with his debut coming in June, when he played 90 minutes against Belgium.

Taylor’s comments show how much ambition, confidence and intent he has. They’re a reflection of how much he wants to be a success at Celtic, and the fans can only get behind him and back him with everything they have.