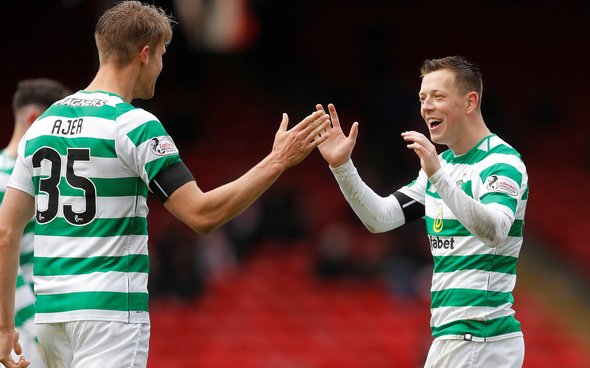 Some Celtic fans are lauding the performance of Callum McGregor after the club’s recent 5-0 win over Hearts in the Premiership.

The score at half time was only 1-0, but four second-half goals lifted the Hoops into a 10-point lead over Rangers in the table after Steven Gerrard’s men lost 2-1 against Kilmarnock.

McGregor was among the goalscorers against Hearts, and after the game, many Celtic fans were lauding the impact McGregor brings to the table. Some of them feel that the midfielder has been the club’s player of the year.

Another fine display from Callum McGregor last night, he has developed into a fine and very consistent player. He plays almost every week and seldom puts in a poor display. pic.twitter.com/WLw26BKpsX

McGregor’s been brilliant since we came back from the winter break man. Running riot.

We’ve had some excellent performers this season, but the only guy in the Celtic team who even enters the conversation regarding Player of The Year with Édouard is Callum McGregor. I largely thought the “CalMac needs a rest” stuff before Xmas was daft. He’s been immense all year.

26-year-old McGregor, who is valued at £4.5 million (as per Transfermarkt), has made 43 appearances in all competitions so far this season. He has racked up a tally of 10 goals and nine assists. He has directly contributed to 13 goals in 26 Premiership matches.

So far this season, James Forrest has contributed to 35 goals in all competitions, while Odsonne Edouard has 39 to his name and Ryan Christie has 33 goal contributions. McGregor has 19 – so while he may not have the highest numbers in that regard, his impact cannot be underestimated.