Some Celtic fans have been discussing the sending off of Kilmarnock’s Alan Power in the sides’ recent Premiership clash.

The Hoops picked up a 3-1 win over Killie on Sunday, but the opposition finished the game with 10 men because of Power’s sending-off in the second-half. Leigh Griffiths, Kristoffer Ajer and Odsonne Edouard were all on the scoresheet for the Parkhead-based outfit.

No, it was a coincidence 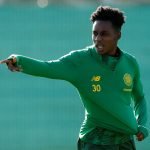 He hates the guy

When Celtic’s Twitter account posted an update about Power’s red card, many Hoops fans were left fuming at the player. Power, who was sent off for a challenge on Jeremie Frimpong, was responsible for a challenge on the defender in the clubs’ previous meeting in January which forced the Dutchman off on a stretcher.

Just this guy just hate frimpong or something

Is it personal? He did this at rugby park aswell

Again? Guy has no skill, nothing but an animal.

defo fancies frimpong , he injuried him at rugby park and tried to do it here

Watch back this tackle which he gets a 2nd yellow for and the one at Rugby park that he got away with. Night and day. Think he was a bit hard done by today. Prob because it was against Frimpong again.

As per Transfermarkt, Kilmarnock have had a total of three red cards in the whole season. Killie have also picked up 42 yellow cards throughout the current campaign, while the Hoops have picked up 30 of them and are second in Transfermarkt’s fairplay table.

It might just be a coincidence that Power got sent off against Celtic given his recent previous against the Bhoys. In total, he has picked up 11 yellow cards in the whole campaign – proof that he is prone to bookings.