This past weekend, Sheffield United faced Bournemouth in the Premier League. Chris Wilder’s Blades managed to complete a comeback after Callum Wilson put the visitors up 1-0 in the first 13 minutes. Billy Sharp and John Lundstram scored the equalising and winning goals respectively, placing the Sheffield side in fifth place. Their spot in the Europa League places will stand for now, though Spurs have a game in hand.

But while it was Sharp and Lundstram who scored the vital goals, it was Chris Basham who Blades fans thought played the best. Many of them thought he was deserving of the Man of the Match award. When the club tweeted out that Billy Sharp received the award instead, the fans were quick to suggest Basham as an alternative choice. Overall, the fans thought the player was immense.

Was Chris Basham your Man of the Match against Bournemouth? 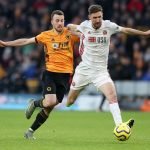 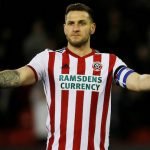 These fans were clearly thrilled with Basham’s performance. The player, who is valued at £2.7 million (as per Transfermarkt), had an 80% passing accuracy, completed two dribbles, made four tackles and wasn’t dispossessed once (WhoScored.com). Any praise that Basham received was almost certainly deserved.