A lot of Newcastle United fans have reacted to Allan Saint-Maximin’s latest tweet.

True Faith NUFC put out a tweet about Faustino Asprilla, and the 22-year-old replied with two emojis, which led to a few Newcastle fans responding with praise for Saint-Maximin.

Yes, he is a maverick 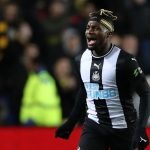 No, long way to go yet 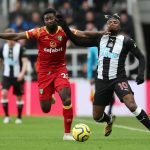 That’s what the fans have been starved of Allan! You can be our guy ?

Better get the dance moves ready??

Most similar player we’ve had since him. Keep it going!

Asprilla was loved on Tyneside because he was an entertainer, and his hat-trick against Barcelona at St James’ Park in the Champions League is never likely to be forgotten.

Saint-Maximin has not quite achieved that status yet, but it seems some Toon fans love him and see a bit of Asprilla in the Frenchman, who has spoken about how he likes to excite fans and that he enjoys taking players on.

During a game earlier in the season, Saint-Maximin attempted to rainbow-flick the ball over the head of Sebastien Haller – who is 6ft 4.

The 22-year-old plays with freedom, and though he has only scored two goals and provided one assist, he is still loved by a lot of Toon fans because of his style.