A lot of Newcastle United fans have flocked to a post showing the importance of Martin Dubravka.

TheOther14 have published stats about all of the Premier League’s goalkeepers, and what they show is that the Slovakian has made the most saves in the league (102) and has the second-best save percentage. (73.9%)

Yes, he is fantastic 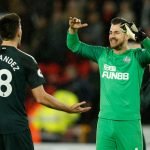 No, he is good but not the their best player 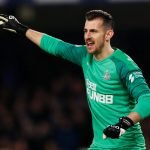 This has drawn a great response from these Toon fans, who are lauding Dubravka.

The importance of Dubravka is UNREAL for us this season. 102 saves, second top on save %. That has to be unheard of. The bloke is invaluable. #NUFC https://t.co/zKiUdkiYQL

Fair few of them been worldies as well. Made the odd mistake but hardly surprising bearing in mind how much work he has had to do. He’s top class

He is turning out to be as important as Given was to us. Because he is a keeper at a club outside the top 6 he will be ignored thankfully as I think he is definitely 3rd best keeper in the league. Maybe 2nd at a push.

Can’t be understated. Must protect at all costs!

He’s class. We will lose him soon.

Top class. Shows which two should be called up for England too… Both Henderson and Ramsdale have been unreal

The Slovakian international, who is valued at £6.3m by Transfermarkt, has kept seven clean sheets this season as well as making 102 saves, so he is clearly having a very good year.

It tells you something that since his debut, Dubravka has played every single Premier League game for the Toon.

Dubravka’s debut was in a 1-0 win over Manchester United, where he turned in a man-of-the-match performance, and he has not looked back.

The fact that the club tied him down to a six-year deal in October could prove to be an excellent piece of business if he can keep up his form.