Liverpool booked their place in the fifth round of this season’s FA Cup after their youngsters put Shrewsbury Town to the sword on Tuesday night.  The absence of Jurgen Klopp was the main talking point heading into the fixture, but after an encouraging display from some of the club’s young talent, the focus soon shifted.

Curtis Jones perfectly executed a nutmeg on Shrewsbury’s Ro-Shaun Williams, and that piece of skill alone has sparked quite the reaction on social media from the Anfield faithful.

Is Curtis Jones ready to be a first-team regular next season? 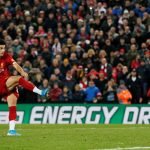 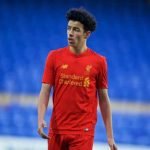 Should get a few games at end of season

Jones has a bright future, brilliant

He should replace Lallana in the 1st team squad at the end of the season ????

Other than LFC fans I don’t think anyone else really talks about Brewster. Curtis Jones just coming into proceedings now, and is rightly so getting talked about.

Judging by that performance, the future at Anfield looks bright. Curtis Jones is just 19 years old and so far this season, he’s been one of the stars of the club’s Under-23s team. To date, the Liverpool-born midfielder has scored nine goals and provided five assists in 13 Premier League 2 appearances.

As well as his three appearances for the first team in this season’s FA Cup in which the youngster has scored two goals, Jones has also featured for Jurgen Klopp’s men in the Carabao Cup.

Based on what we’ve seen so far, we suspect it won’t be too long before he’s knocking on the door of the first team regularly.