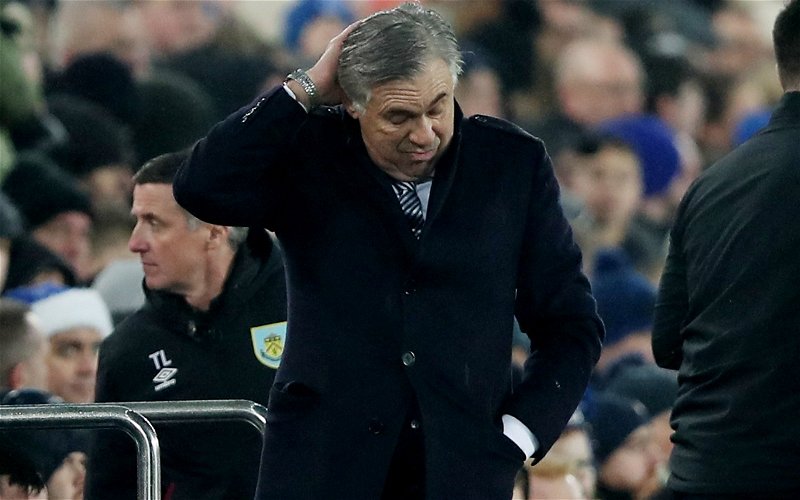 Supporters of Everton have been reacting to quotes from Carlo Ancelotti following the 3-2 defeat to Arsenal which were relayed by the club on Twitter.

Following the defeat, the 60-year-old Italian admitted that he was “not happy” after conceding three goals “too easily” (per Everton), which had some supporters also airing their disappointments.

? | "I'm not happy, of course. The performance was good offensively, but we conceded three goals too easily."@MrAncelotti's #ARSEVE verdict… pic.twitter.com/WcBql9SdU9

Totally agree Mina is awful as are the right backs and goalkeeper ?…
I wouldn’t lose any sleep if Digne was replaced either haha…clear out needed!!!!?

The defeat against Mikel Arteta’s Gunners comes as the third of the Ancelotti era in all competitions, with the others coming against Manchester City and Liverpool (per Sky Sports).

However, with the Toffees having won five, drawn two and lost two in the Premier League since the Boxing Day victory over Burnley (per Sky Sports), many supporters were keeping their faith in Ancelotti.

The megafone blues are still getting Europe

Trust this man to sort the mess that the last 4 managers have created. We are a bang average squad and he has already made us so much better. Could have scored another 4/5 goals today if not for wasted chances

Just got to do better next eeek, gaffer. We’re behind you and the lads!

Following the defeat to Arsenal, the Merseyside club now sit 11th in the Premier League table, though, they only trail seventh-placed Sheffield United by four points (per BBC).

With a tie against fifth-placed Manchester United coming up next weekend (per BBC), it could be a crunch tie if Everton are to challenge in a European competition next season.