Rangers: These fans think Kamara cost them the match

Rangers suffered a massive set back in their league title aspirations this weekend as they dropped points to Hearts. The 2-1 loss drops them five points behind first-place with a game in hand. There is still hope for the team to win the league, but the loss could have a huge impact on the morale of Steven Gerrard’s players.

One of the players who received a lot of stick from the Rangers fans after the match was Glen Kamara, who is valued at £765k (as per Transfermarkt). Many of them blame him for Hearts’ first goal. Instead of releasing the football, he ran into pressure and was dispossessed by Hearts’ Craig Halkett. This resulted in Liam Boyce receiving the ball out wide and playing in a cross to Steven Naismith to slot home. Fans can rewatch the mistake on YouTube here (3:16).

Kamara is a good player but what was he thinking in the build up to Hearts’ first goal? @RangersFC players shouldn’t be making that type of error.

That was awful from kamara

Polster did well when he came on, few good passes. Kamara killed us trying to hold onto the ball for too long

Can’t believe you missed Kamara. A disgrace and worse than a man down today

If Kamara boots the ball into row z we win game,what does he do tries risky back pass,midfield has to be better,our back up players aint good enough,need couple of fresh faces in,striker and defender.

Total shambles
Some players clearly aren’t up to it,Kamara was a total waste of a shirt.

Players not got the bottle mate , Defoe Davis Kamara especially where a disgrace today . Beat by a team that wanted it more , be the same as last season .

Some of the things you read on here after a defeat, something we haven’t been used to much this season btw, is embarrassing. Be annoyed, disappointed but if you’re throwing in the towel then have a word with yourself.

However I will be raging at Kamara until Wednesday

Do you think Kamara's mistake will cost Rangers 55? 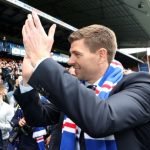 If Rangers end up losing the league at the end of the season, fans may look back on this moment as being a crucial one. Had he cleared the ball into the stands, as one fan above suggested, they could still be sitting comfortably in the league.