These Leeds United fans would like the club to try and get Brighton’s Glen Murray, despite the striker being 36-years-old.

Journalist David Smith has allegedly claimed that Leeds United are: “Pushing hard for Che Adams on loan. Southampton want another striker in before deciding whether to loan him but Leeds want a player in as soon as possible. Glenn Murray also on the shortlist.”

Glenn Murray seems to be the player most of the fans were keen on bringing in to Elland Road, which is surprising considering to striker is 36-years-old, but perhaps these fans believe Murray would be happy playing from the bench, with Patrick Bamford leading the way. Bamford has already played 25 Championship matches in total for Leeds this season, making him a difficult player to push out for the squad.

Here’s what the Leeds fans had to say about Murray after Smith allegedly broke this rumour on Twitter:

LEEDS. Pushing hard for Che Adams on loan. Southampton want another striker in before deciding whether to loan him but Leeds want a player in as soon as possible. Glenn Murray also on the shortlist. #Lufc #LeedsUnited

I’d take Glenn Murray all day long …… probs not the best signing with an eye on next season but he’s the man to get us up this season.
Not sure he’s has back to back 90mins of Championship football left in his legs but used in rotation with Pat would be lethal

Murray would be excellent, but would he be happy as a back-up?

Would you like to see Glenn Murray join Leeds United? 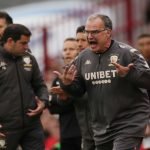 Murray has only started three matches in the Premier League this season, playing a further 10 off the bench. However, his lack of action throughout the campaign does not appear to have had any impact on the thoughts of these supporters, with many of them keen on the Brighton.

Take Murray all day , proven at this level and will definitely score goals.

If Leeds are looking for a Patrick Bamford backup striker then Glen Murray could be just what they need. With the Brighton striker being 36-years-old, he would likely expect a 26-year-old Bamford to start over him.

However, with Murray, who is valued at £1.8 million (as per Transfermarkt), only playing 399 minutes of Premier League football this season, he may not be up to the fitness levels needed to play under Marcelo Bielsa. For this reason, we would avoid the 36-year-old and maybe go for a younger signing or promote an academy player.