A lot of Leeds United fans have responded to the news that Kun Temenuzkhov is set to leave the club in this window.

According to a report in the Yorkshire Evening Post, the Bulgarian forward could be on the way out of Elland Road before February the 1st.

Is this a wise decision by Leeds? No, should keep him 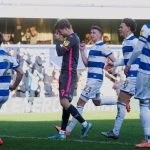 Temenzukhov just signed a contract extension in September, but now the club want to sell him.

This news has not gone down well with some Whites fans who are disappointed to see Temenzukhov leave.

A question asked on a daily basis… but Kun Temenuzhkov's time with Leeds United could be coming to an end before next week's transfer deadline. #lufc https://t.co/aWmiAQEW4x

I remember a piece a couple of years ago where he was being touted as the next global superstar, what happened?! Maybe his attitude doesn’t fit with our club?

Massively disappointing news, has looked a class act whenever I’ve seen him for the U23’s… Letting go a few quality youngsters which is surprising….

Could regret that one day. #LUFC

Thought he would make the jump this year to first team. Unfortunate. #lufc

he’s looked pretty decent from what i have seen of him.

The 19-year-old has been with the club since July 2017 when he joined from Barcelona’s youth academy.

The Bulgarian Under-21 international broke through into Leeds’ Under-23 side and scored seven goals, but this season he has only made two appearances and is thought to be close to a move back to Spain.

This would be a shame, but perhaps Temenzukhov is just not cut out for English football.