Some Celtic fans have been left laughing at the latest Twitter post by the club’s defender Christopher Jullien.

The Hoops recently picked up a convincing 3-0 win over Ross County in the Premiership, days after beating Kilmarnock 3-1 away from home. The win over Ross County saw Odsonne Edouard grab a brace, while midfielder Callum McGregor also scored a goal of his own (Whoscored).

Can Dembele ever be as tall as Jullien? 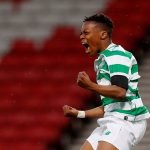 After the game, Jullien posted a photo of himself and youngster Karamoko Dembele. The difference in height between the two Hoops stars left many fans laughing. They couldn’t believe the difference.

That is a cracking photo of you both.

Was it take your son to work day??

Size difference in Julien and Karamoko is just unreal

So far this season, Jullien, who is valued at £5.4 million (Transfermarkt), has been a regular in the central defensive position for the club. He has made 34 appearances in all competitions so far for them, scoring five goals and racking up one assist as well. In the Premiership, the Frenchman has made 20 appearances and has two goals to his name.

He had arrived at the club from Ligue 1 side Toulouse in the summer of 2019 for a fee of around £7million.

Dembele, 16, made his first appearance of the current Premiership season against Ross County too. He played only five minutes of the game.

But Dembele has already made an appearance for the club in the UEFA Europa League. He had become the club’s youngest debutant in Europe, featuring against CFR Cluj in the last game of the group stages.

It is certainly a funny sight, considering Dembele was pretty much half the size as Jullien. While they might not be father and son, there’s no doubt that Dembele surely has a bright future at the club after already appearing in the Europa League.