Celtic: Some Hoops fans react to interest in Ian Poveda

Some Celtic fans have reacted to the club’s recent interest in Manchester City youngster and Leeds United target Ian Poveda in the ongoing January transfer window.

A report from Italian outlet Tuttosport (as per Sport Witness) has said that Poveda has been offered to Celtic recently, with Leeds in the race as well. The report goes onto say that Serie A side Torino are also interested in securing the services of the 19-year-old Man City starlet.

Celtic fans: Would Poveda be a good signing?

We have too many wingers 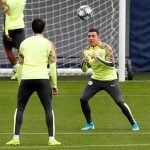 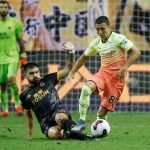 Indeed, on Twitter, many Celtic fans have been discussing a potential move for the Leeds-linked teenager.

Not great from what I have seen of him, quite small and fast, but lack strength and gets pushed off the ball fairly easily, who knows, maybe we can turn him into a world beater, but he isn’t anywhere near young Frimpong’s level…

Really can’t see the point. Is he any better than Shevd?

Is this the lad Frimpong had the partnership with at City ?

We really need him, we have about 12 wingers

Per Transfermarkt, Poveda’s current deal at the Etihad runs out in the summer of 2020. For the club’s Under-23s side, he has made 11 appearances in all competitions this season. He has racked up a tally of three goals and two assists too.

He was a regular for them last season too, having made 29 appearances in all competitions for them. He racked up a tally of six goals and just as many assists, playing all across the front three too.

14 of his appearances last season came on the right-wing, with six coming in the centre-forward position too. Two appearances came from the left-wing.

Poveda’s numbers show promise and that is a good thing for any player who is 19. His numbers show that he can contribute to goals on a regular basis. Celtic have forged a good relationship with Man City in recent years, considering the transfers of Daniel Arzani and Jeremie Frimpong happened with them. Poveda will not be a bad move at all since he will be a cheap signing because of an expiring contract, however it appears many of the club’s fans have different feelings.