Manchester City have completed the signing of the highly-rated defender Camron Gbadebo from Leicester City. The 17-year-old had been on trial with the Premier League champions after reportedly impressing their scouts.

Despite being highly thought of at the King Power Stadium (Leicester Mercury), the defender had yet to appear in Steve Beaglehole’s under-23 side. Gbadebo made 11 appearances for the under-18’s (as per the Leicester Mercury) and had previously spent time with both Crystal Palace and Watford before moving to the East-Midlands.

Do Man City need a ready made central defender during this window? 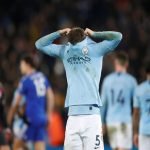 TIF Tactics – One for the future?

It appears Manchester City are keen to ensure their talent pool of young starlets doesn’t dry up anytime soon as they continue to recruit some of the games hottest prospects. The club’s scouting network stretches right across the globe these days but this time they’ve looked a little closer to home and identified a player they believe to be a star in the making.

Centre-back has been one of the few positions you always felt Pep Guardiola’s team could improve and the failure to replace Vincent Kompany in the summer coupled with the injury sustained by Aymeric Laporte has had a detrimental impact on the club’s season.

Although the signing of Gbadebo doesn’t represent a ready-made solution to their troubles, it does mean the future looks bright for the Cityzens. The announcement of this latest acquisition is not one that will have the fans jumping off of their seats with excitement but one that could be of great importance in the years to come.