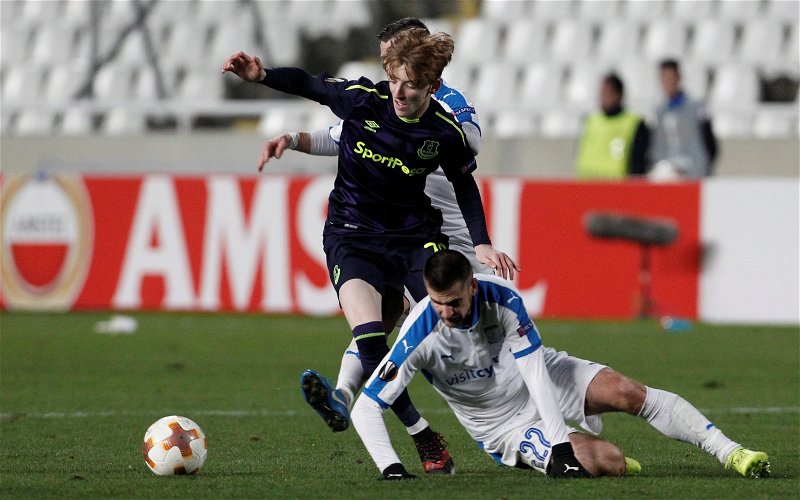 Bayern Munich have reportedly had an interest in signing Anthony Gordon from Everton, according to the Athletic.

In the piece on the 18-year-old Englishman, posted on Thursday, it was revealed that enquiries have started to come in again over the past few months, with Bayern Munich understood to be among those interested.

As the Athletic stated, ‘loan deals have been mooted’ for the attacker, however, he now stands a good chance of featuring for the Toffees’ first team under Carlo Ancelotti.

TiF Tactics – How does he compare to Everton’s starters?

A decent run out in the first team for Gordon will feel like it has been a long time coming for supporters of Everton (as per Liverpool Echo).

Since the 18-year-old’s debut in 2017, the attacker has made only one further appearance for the Toffees, that being in the Carabao Cup, penalties defeat to Leicester City under Duncan Ferguson last month (via BBC).

However, if there is one thing that the 1-0 defeat against Liverpool’s younger-looking starting XI in the FA Cup proved, it is that youth can impress when given the chance (as per The Telegraph).

During that game, three starting attackers, Richarlison (3/10), Theo Walcott (4/10) and Dominic Calvert-Lewin (3/10) all failed to impress (as per Liverpool Echo).

Gordon has played right across the front three for the youth team this season (per Transfermarkt) and it could pay dividends for Ancelotti to give the prospect a run out ahead of one of the three against Brighton and Hove Albion.

In 12 games for the Toffees’ youth team, the 18-year-old has seven goals and three assists (per Transfermarkt), giving him a goal involvement every 1.2 games.

This being exactly double Calvert-Lewin’s goal involvement every 2.4 outings for the Toffees so far this season, having scored ten in 24 outings (via Transfermarkt), showing that Gordon could be more reliable if he can make the jump up in standard.