Celtic: Some Hoops fans rave about performance of Christopher Jullien

Some Celtic fans can’t stop raving about the performance of Christopher Jullien following the club’s recent 2-1 win over Aberdeen in the Premiership at the weekend.

Celtic remained at the top of the Premiership on Saturday and are yet to lose a single game since they lost to Livingston in the league two months ago.

The game saw Jullien score a goal, while Odsonne Edouard scored another goal for himself. Sam Cosgrove scored a goal and was sent off later for a tackle on Kristoffer Ajer.

Celtic fans: Is Jullien the best defender in Scotland? 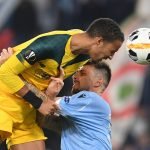 Some Celtic fans can’t stop hailing Jullien, with some hailing him as the best defender in Scotland.

Best Centre Back in the league, there’s no argument

the best since VVD

Best defender in the world

The best CB since Charlie Mulgrew!

Jullien arrived at Parkhead from French side Toulouse this past summer. His transfer fee was around £7m and he was the club’s second-most expensive signing in club’s history. He has shown his abilities this season, establishing himself as a regular alongside Kristoffer Ajer.

The Frenchman, who is valued at £5.4 million (as per Transfermarkt), has played 29 times in all competitions for the Hoops this season, scoring four goals while playing at centre-back. He was the man who won the club the Scottish League Cup by scoring in the final against Rangers. He had also scored for the club in a Europa League game against Lazio in their 2-1 win in Glasgow.

He was a regular for the club in the Ligue 1 against Toulouse last season too. He played 35 times in all competitions for the club, scoring once.

Jullien’s performances have been immense for the club. He is a big reason why the club has the best defensive record in the Premiership, letting in ten goals- as many as Rangers with Steven Gerrard’s men yet to play their game in hand. Jullien has been crucial to that and he is well worth the fee.