Rangers: Daniel Candeias has found success during his time at Genclerbirligi 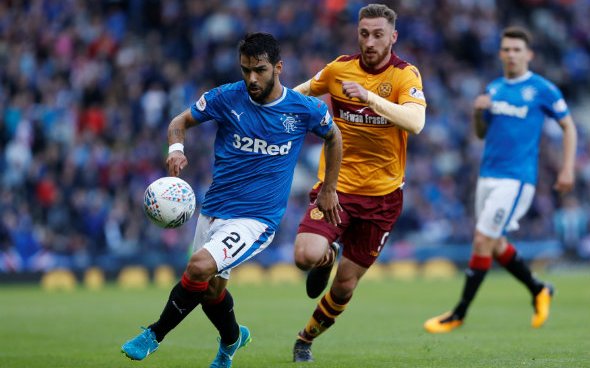 This week Football Insider published a story indicating that Rangers hierarchy were ‘miffed’ by the sale of Daniel Candeias during Mark Allen’s reign. The 31-year-old left Rangers in the summer to play in the Turkish League with Genclerbirligi. He was a fan favourite during his time at Ibrox, according to Football Insider.

The report suggests that Candeias was offloaded because of an influx of incoming players to the team in that position. Considering that the player left on good terms, fans will surely be hoping that he does well for the rest of his career. But how has Candeias done since moving to Genclerbirligi?

Candeias has played 1081 minutes so far this season for the Turkish side. We will look at his statistics on average per 90 minutes and then compare them to his time at Rangers.

The winger, on average, makes 34.47 passes every 90 minutes, averaging and accuracy of 69.57%. He takes around 1.95 shots per game, hitting the target 30.43% of the time. Of his 23 shots this season he has only scored three times. All of those goals came in the same game when Genclerbirligi beat Antalyaspor 6-0. Candeias also registered two assists that day. He only has one other assist to his name for the season. In terms of total auctions, the Portuguese man average is 67.69 total actions per game, 57.07% of which are successful.

Last year, during the 2018/2019 season, however, things weren’t much different for the player. He averaged 38.83 passes per 90 minutes, with a 71% accuracy. Regarding shots on target, the player took less shots than he does now, averaging 1.43 a game. However, his shot accuracy has decreased slightly, as 34.4% of his shots hit the mark during 2018/2019. While at Rangers, Candeias attempted more actions per game, averaging 75.03 total actions per 90 minutes. However, only 51.8% of those actions were successful.

It appears that it is business as usual for Candeias in Turkey. He is neither exceeding expectations nor falling short of his previous statistics. Rangers fans will be happy to see the player has found a comfortable new home after being moved on.