Celtic: Bhoys ready to cut their losses on Eboue Kouassi in January

Scottish giants Celtic are set to incur losses in the potential sale of midfielder Eboue Kouassi soon, as per Football Insider.

The report claims that the Hoops are willing to let Kouassi leave at the earliest possible chance, with a January exit now appearing likely. Celtic are open to let him go in either a permanent deal or in a temporary loan deal.

Neil Lennon’s are ready to offload the player for much less than the £3million that was paid to Russian club Krasnodar to sign the Ivorian in the winter of 2017. The losses are expected to rise up to £2 million but it could reduce if a loan deal is done in January.

Should Celtic look to cut their losses on Eboue Koussai? 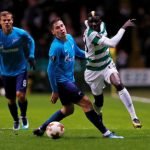 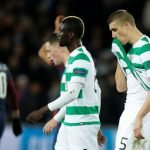 Out of favour in Glasgow

Still 21, Kouassi, who is valued at £675k (Transfermarkt), has never become a first-team regular at Parkhead ever since he arrived. In total, he has played a total of 22 times in all competitions for the club since then and has one assist to his name.

He is yet to make a single appearance so far this season, but he did play five times in all competitions for the club last season. Two of those games were in the Premiership. But since playing against Hibernian in October 2018, he hasn’t played a league game and suffered an ACL injury soon after – meaning he has not featured for Lennon.

During his time at Krasnodar, Kouassi had played 19 times in all competitions. He also scored once in Russia, assisting twice.

The ACL injury has had a big impact on Kouassi’s injury, as the midfielder hasn’t played a single game since then. The midfield situation at the Hoops won’t give him too much encouragement either.

So far this season, Neil Lennon has predominantly used a 4-2-3-1 shape. Scott Brown and Callum McGregor have been regular central midfielders in the system, with Nir Bitton coming in and playing in that position sometimes too.

Lennon has already been public about how the club wants to sign Victor Wanyama, meaning that Kouassi’s time is now already up.