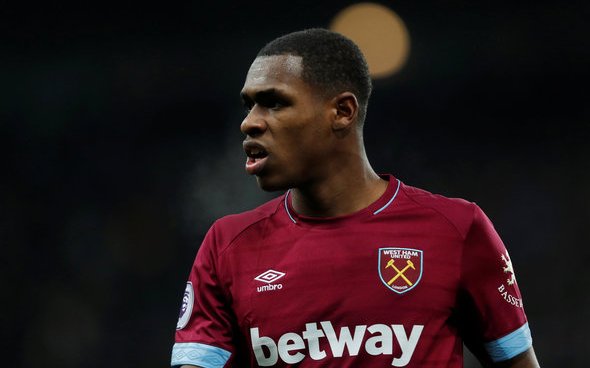 West Ham could be without defender Issa Diop for their upcoming trip to Stamford Bridge if he was to pick up a yellow card during the London derby with Tottenham Hotspur this weekend, as per Football.London‘s recent report. Diop, has already received four yellow cards this season and another one would lead to a suspension.

The French defender has been an ever-present in the Premier League for the Hammers this season, therefore, his absence would force Manuel Pellegrini into re-adjusting his back-line.

TIF Tactics – How has Diop fared this season?

Diop moved to East London back in July 2018 from French side Toulouse. The Hammers paid in excess of £22m for the player but according to TransferMarkt.co.uk, his value has since increased to £31.5m. The central-defender has an average performance rating of 6.67/10 according to WhoScored.com, making him one of the team’s most consistent defenders.

The 6ft 3in defender averages 1.8 interceptions per match, 3.8 clearances and a pass success rate of 83.4%. West Ham have had an extremely difficult period of late and with fixtures versus Spurs, Chelsea and Arsenal in the not too distant future, there are no signs of the pressure on Pellegrini and his staff easing up.

Diop earned his fourth booking of the campaign during the defeat to Newcastle United a few weeks back when he brought down Miguel Almiron. Given the recent form of the West Ham side, it’s difficult to argue that anybody is irreplaceable but being without the 22-year-old will leave the boss with a huge void to fill should the centre-back pick up another caution.