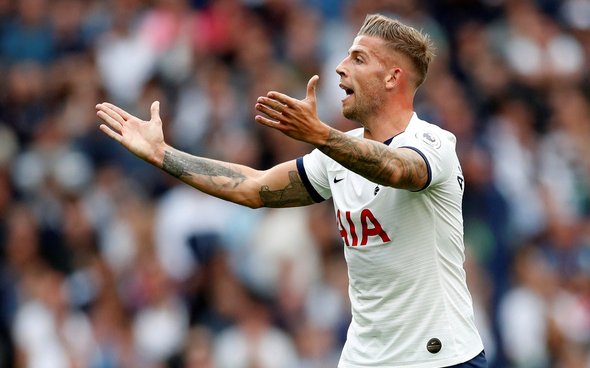 Spurs fans are not enjoying the chaos at the club at the moment; with the club struggling in the league and several players set to leave on a free; which has led many fans to suggest that the club should have sorted Toby Alderweireld’s contract some time ago.

The Belgian defender, who joined from Atletico Madrid in 2015, looks set to leave the club at the end of the season when his contract runs out. The 30-year-old defender was linked with a move away in pre-season with Spurs trying to cash in on him but it now seems as if the former Southampton man will leave on a free transfer.

This has frustrated a lot of Spurs fans who felt the defender was well worth the money when he seemed to be in his prime a couple of years ago. The defender failed to agree new terms with Daniel Levy and the club, meaning foreign clubs will be free to approach Alderweireld in January ahead of a summer move.

The majority of Spurs fans seem to think that the club should have paid whatever was necessary to secure Alderweireld when he was at his peak, as can be seen in the tweets below.

Toby wanted a contract he wasn’t worth? Same Toby who was part of the stingiest defence two seasons in a row when he wanted it?

Wanted a contract he’s not worth? Now that is so unbelievably untrue, he would have been worth every penny

wanted a contract he’s not worth?

Keep Toby, We should of sold the Danish Lawnmower in the summer and let Jan and Danny run down their contracts. Jan is getting too old for the speed of the Prem and Rose has been a shadow of his former self after that year long injury. #COYS

To be fair to Toby he has remained a consummate professional throughout. His performances have dipped slightly but he’s just got on with it.

This all stems from that 18 month period of not signing anyone. That was the time for those players to bed in. We’ve set ourselves back

Toby is one of if not the best centre half in the league… the damage is done now so clean it up as quickly as possible.

Spurs fans are clearly disappointed with the club’s decision to not extend Alderweireld’s contract or sell him when it was profitable to do so.

Spurs had a dreadful transfer window in terms of selling players, with no deals sorted for Christian Eriksen or Alderweireld, which is going to seriously cost the club should they leave on a free.

If Mauricio Pochettino is still with the club for the next two transfer windows, he may have to manage a serious overhaul of the squad. Alderweireld has regularly averaged a 7.0 rating or close to it in his four years with Spurs and it is surprising that the club didn’t feel he was worthy of a new contract.