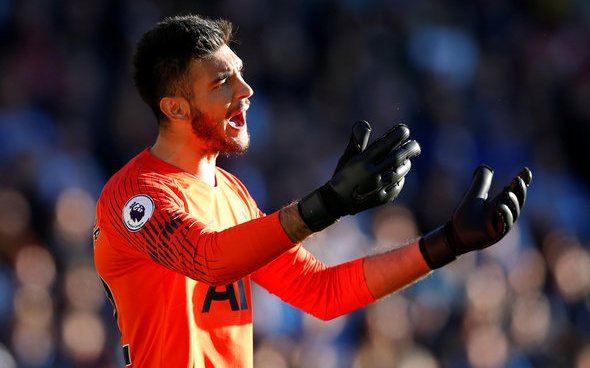 A tweet comparing Spurs ‘keeper Paulo Gazzaniga with Chelsea’s Kepa Arrizabalaga has caused some discussion amongst Spurs fans recently, with some singing the praises of the 27-year-old whilst others claim he’s far from good enough.

The tweet, which was posted by LastWordOnSpurs generally seems to suggest that Gazzaniga is having a better season than Chelsea’s Spanish keeper, who became the world’s most expensive goalkeeper when he joined for £71 million from Athletic Bilbao in 2017. Gazzaniga has been stepping in for usual first-choice keeper and club captain Hugo Lloris; who suffered an elbow injury in Spurs’ 3-0 defeat by Brighton in October.

Gazzaniga has largely been a fringe player under Pochettino but has demonstrated his ability in goal in recent matches, earning an impressive 8.88 rating in Spurs’ 2-1 defeat by Liverpool last month.

Reactions from Spurs fans to Gazzaniga’s season so far and the comparison with Kepa can be seen in the tweets below.

It’s early days, but interested to know if those who basically suggested I was talking rubbish when I said this time playing would give us an idea whether Gazza was good enough to be our future 1st choice have changed their minds at all?

Just on the eye test though, Gazza looks like a keeper. He just looks long and athletic it inspires confidence for me to be honest.

Not that Hugo didn’t but I think Gazza is one for the future!

Why bring Lloris back ? #COYS

Shame however good he is Poch will drop him as soon as Lloris is fit.

Some Spurs fans are clearly grateful for the job Gazzaniga is doing in Lloris’ absence.

Gazzaniga, who is valued at £1.8 million (as per Transfermarkt), has been impressive since coming into the side; averaging a 7.07 rating in his appearances for Spurs so far this season. This, in fairness, is much higher than that of Kepa’s, with the 23-year-old keeper averaging a poor 6.63 rating, however, he has played significantly more than Gazzaniga. We must also factor in that Gazzaniga has faced a much higher number of shots, despite his brief time in goal, with Spurs having conceded the highest number of shots on goal in the Premier League.

Nevertheless, the Argentine ‘keeper looks a solid back-up for Lloris but you would expect the experienced Frenchman to regain his place in the squad whenever he returns from injury.