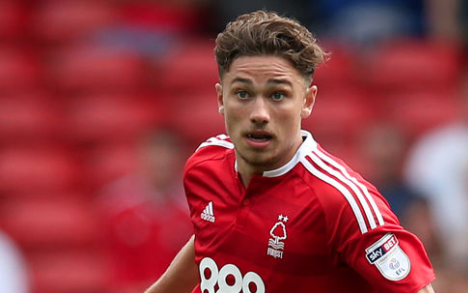 Premier League side Everton are said to be lining up and offer for Nottingham Forest defender Matty Cash, as per The Sun (via Nottingham Post).

The Toffees have been attracted by the 22-year-old’s performances in the Championship so far this season and the report claims that they have watched the full-back play multiple times already so far.

They also state that Premier League duo Crystal Palace and Southampton are also keeping a close eye on the Forest youth product. Cash’s price tag is rumoured to be currently at £12 million, as per the report from the Sun.

Pulling up trees at Forest

The man from Slough has been one of Forest’s most impressive players under Sabri Lamouchi this season. The former Wycombe Wanderers man hasn’t just played at right-back so far but has also played in the right midfield position.

He has played in 14 Championship games this season, scoring twice and assisting just as many times for the club. He has also played in the League Cup for the side, appearing twice and making one appearance from the bench as well.

Cash joined the club in the summer of 2014 from the FAB Academy and spent two years of his development with the club’s youth side. The 2016-17 season was his first full campaign at the City Ground and Cash played 28 Championship games that season, assisting thrice.

In total, the 22-year-old has played as many as 113 times in all competitions. During this time, he has racked up a tally of 12 goals and just as many assists too.

As per WhoScored, Cash has been Forest’s most important player this season with the highest rating for the campaign, standing at 7.27. His completeness as a player is a key reason for that. It isn’t just in terms of goals and assists that he thrives, but he has done well in terms of tackles and interceptions too.

It shows how important the player is for Forest. And if he does leave the club mid-season, Forest might not be able to achieve promotion into the Premier League. The way he is playing, Cash is a major reason for why Forest are as high as fifth in the league with a game in hand.