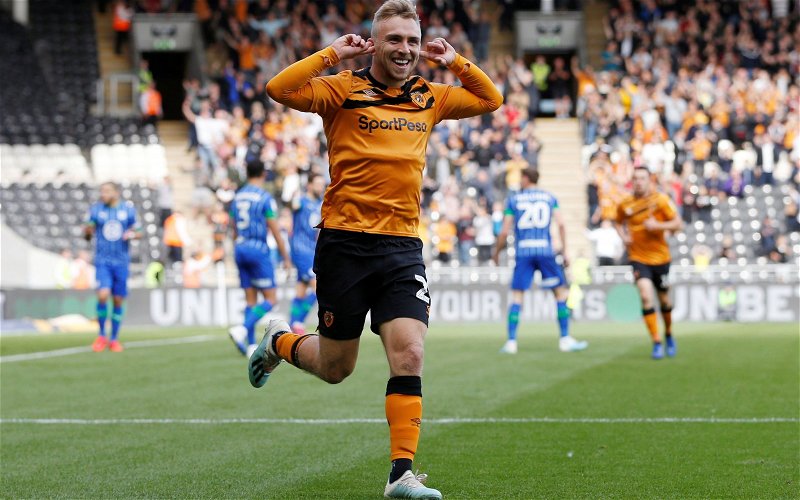 Many Aston Villa fans have been discussing their thoughts on making a move for Hull City’s Jarrod Bowen, who has scored seven goals this season.

Bowen is nearing the end of his current terms at the KCOM Stadium, and while the Tigers hold an option to extend his deal for a further 12-months, many Villa fans would welcome their club making a move for the 22-year-old.

The Leominster-born wide-man has featured in each of Hull’s 13 Championship fixtures so far this season, and has found the back of the net on six occasions, including striking his side’s second of the night on Wednesday as Grant McCann’s men beat Nottingham Forest 2-1 (WhoScored).

Newcastle United and Southampton are said to be interested in Bowen, though, with the Toon and Saints both keeping tabs on the forward as the Tigers could struggle to keep hold of the youngster in January given his terms laps in June (Express).

A transfer would be expected to set any pursuant side back £20million, after he was named in the Championship Team of the Season last term, and added to his efforts in the second-tier with a goal from the bench against Preston North End in the Carabao Cup this August.

Hull resisted temptations to cash-in on Bowen during the summer market, and will again hold out for their full asking price in the winter to try and ward off interest in their current top-scorer in the league.

And while there are no official transfer rumours linking Aston Villa with Bowen just yet, some Villans supporters hope their club does make a move in January, as the wideman is a ‘pacey, strong winger’ that is direct and has an eye for goal…

Would be very happy if we signed this lad. https://t.co/osGWtO9svr

100% agree being saying that since the summer. He’s a pacey, strong winger who’s direct and an eye for goal. Even better his contracts out in the summer so could get a deal done cheaper

Bowen’s efforts in the Championship this campaign are a reflection of his results last term, which led to a place in the Team of the Season.

The winger, who joined the Tigers’ academy from non-league Hereford Town in 2014, hit 22 goals and four assists in 46 games in 2018/19 (TransferMarkt), including the opening effort against Villa in January as the two sides played out a 2-2 draw. His brace against Birmingham City in March also ensured the Tigers kept all three points on home soil.

Villa fans are ‘gobsmacked’ that Bowen is still plying his trade in the second-tier, and feel the ‘class act’ is ‘way too good for the Championship’.

Gobsmacked that he’s still playing at that level

Class act way to good for the championship

Villa fans discussing potential players to target in January has seen some supporters name drop other options they would like the Birmingham-based outfit to target come 2020, such as Brentford’s Said Benrahma.

The 24-year-old was a target of the Villans this summer, but the Claret and Blue side moved on from the Algerian after seeing a £14m offer rejected (Sky Sports). Benrahma was said to be keen on linking up with Dean Smith again, following their time together at Griffin Park.

Benrahma scored ten, assisted 15 in 38 Championship appearances last season, and has scored once, assisted twice in 11 this term – each coming in his last two outings (TransferMarkt).

@AVFCFaithful_ Him or Benrahma with another striker possibly Moreles in January would be decent.