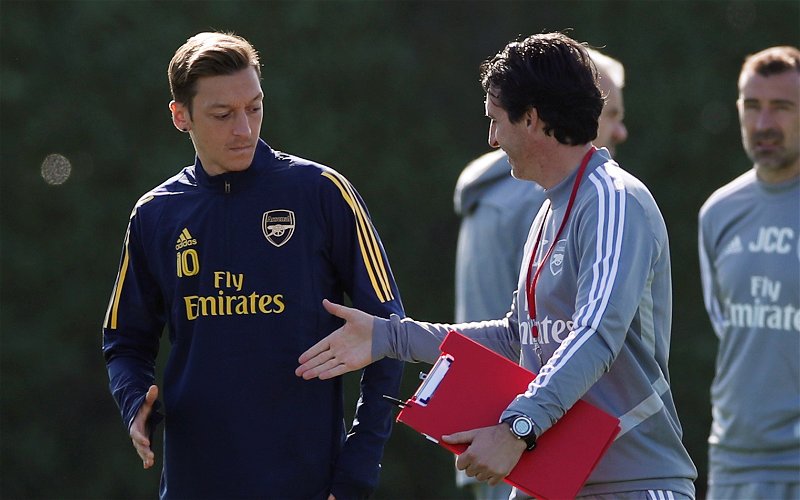 Arsenal Head Coach Unai Emery say’s he held talks with Mesut Ozil recently where he told the German his view of him had not changed since the start of the season. Ozil will travel to Anfield for the Carabao Cup Fourth Round tie with the rest of the squad despite having been ostracised in recent weeks.

Despite including the German playmaker in the squad, the Spaniard was keen to raise the point that the pair had been engaged in dialogue as recently as this morning but how have the fans reacted to his latest comments?

And my view of Emery’s incompetence has not changed either

Didn’t he give a press conference quite recently where he said Ozil was now working well and would be used in the forthcoming games? He’s all over the place.

He’ll play Özil with the B team against Liverpool and they’ll be destroyed because it’s Liverpool. This will then fuel that he’s “not good enough”. Özil will be the scapegoat for this game and will support Emery’s agenda.

Emery is an idiot but he knows what he’s doing here.

Our own view of Emery too hasnt changed. You can let him know he has done the team no good tactically

As previously mentioned, Ozil has been deliberately excluded in recent weeks and so his inclusion for Wednesday evening’s Carabao cup clash will have raised a number of eyebrows. As recently as the weekend, Emery claimed the club’s hierarchy were fully in support of his decision to exclude the player prompting many to believe this was part of a deliberate plan to force the German’s departure.

Will his inclusion this week open the door to a potential return to Premier League action or is the Carabao Cup as good as it gets for Ozil? Arsenal have lacked creativity in recent weeks and Ozil certainly adds that if nothing else. There’s no questioning his ability to create chances for his teammates and so in terms of merit, he should at least be making the match-day squads. The relationship between the player and manager is clearly unstable but its the constantly changing narrative that will leave the supporters frustrated.