West Ham have joined Tottenham in pursuit of Fenerbahce striker Vedat Muriqi, according to Sabah.

The Turkish newspaper claims that Muriqi, 25, is attracting attention from across Europe after a strong start to the season with both Fenerbahce and Kosovo.

AC Milan, Napoli, Inter Milan, Atletico Madrid and Valencia are also said to be eyeing up the Kosovo international, who only joined Fenerbahce in the summer when he signed a four-year deal that does not include a release clause. 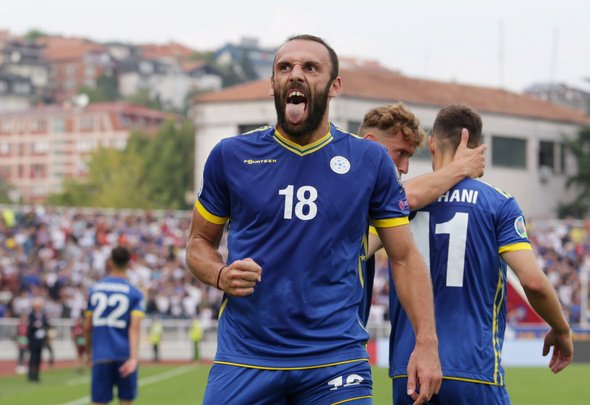 Muriqi has not wasted any time in settling down at Fenerbahce by scoring two goals in his first three league appearances for the Istanbul giants.

He has also carried his form into international fixtures by scoring goals in each of Kosovo’s recent Euro 2020 qualifiers against the Czech Republic and England.

West Ham might want a new striker in the January transfer window after Javier Hernandez’s early September switch to Sevilla left Manuel Pellegrini with Sebastien Haller and Albian Ajeti as his only natural strikers in the senior squad.

Haller and Muriqi have both started three league matches this season yet Haller currently leads the Kosovan by scoring three goals compared to his two.

Although he has not scored as many goals, according to stats by WhoScored, Muriqi is leading Haller in the number of shots at goal and key passes he has made so far in the league this season. 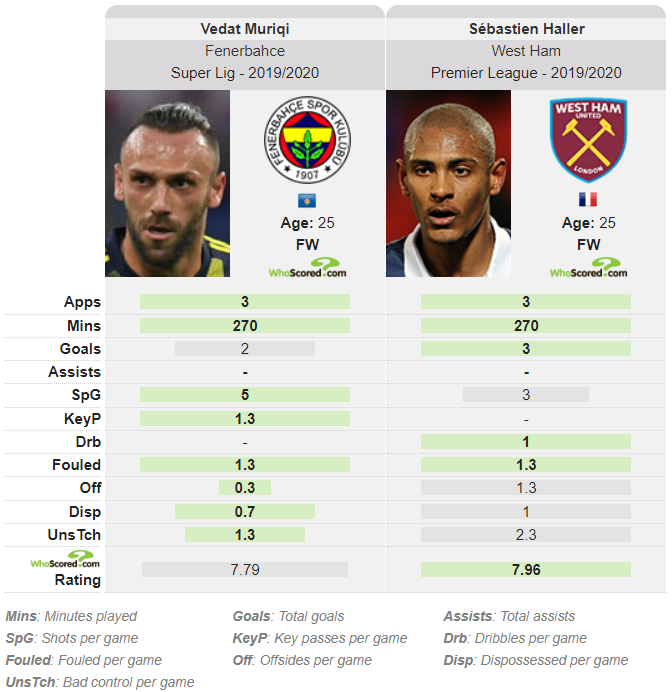 Muriqi has also been dispossessed less often than the ex-Frankfurt striker and made fewer bad touches.

Although Muriqi’s stats look better than Haller’s, it would be poor to not point out that Fenerbahce are a team that are widely expected to finish a lot higher in their league this season than West Ham are in the English top-flight.

Therefore Muriqi is bound to be involved in a lot more attacking phases of play.

Fenerbahce have enjoyed 63.8 per cent of possession in their first three Super Lig matches while West Ham have had 45.9 per cent in their four Premier League games.

Muriqi is bound to get more attacking opportunities than Haller this season and the fact that the Kosovo international has averaged more shots at goal per game so far than Haller, yet scored fewer goals, suggests that the Hammers front-man is a much more clinical finisher and perhaps a better option to stick the ball in the back of the net out of the two.

It all depends on what happens between now and January and what West Ham are willing to spend in the winter.

Sabah’s report says that Muriqi does not have a release clause in his contract so amid all the interest in him, there’s a good chance that Fenerbahce will want a good amount of cash for the striker they only signed in the summer from Caykur Rizespor.

West Ham might not even need to spend big on a striker either.

Pellegrini has Haller and Ajeti to choose from up until January and that will be the time of year where Michail Antonio is expected to return from injury and he can play as a striker if there is an injury crisis in that area.

West Ham are better off waiting to see if Muriqi keeps up his form all season and going in for him in the summer if they really want him.

However if both Haller and Ajeti suffer injuries, they might want to fast track their hunt to sign the Kosovan.