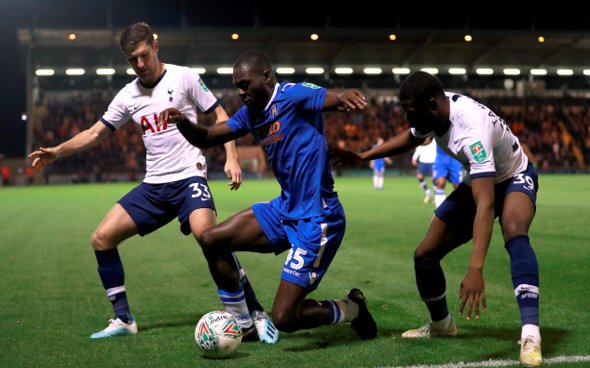 Tottenham crashed out of the Carabao Cup on penalties to League 2 side Colchester in the shock result of Tuesday night.

It was a sobering defeat for Spurs fans on a night when they would have been excited to see two youngsters, Troy Parrott and Japhet Tanganga, make their debuts for the senior side.

It wasn’t the night either would have dreamt about.

Penalties were missed by Christian Eriksen and Lucas Moura in the shootout, but that wasn’t the real issue on Tuesday night.

The way his Spurs side struggled to score against Colchester will be a real worry for Mauricio Pochettino, and comes after a 2-1 turnaround defeat against Leicester at the weekend.

It’s highly unlikely that Tanganga will feature against Southampton on Saturday but fans were complimentary about the 20-year-old centre-back.

I can't even fault the youth, I want Parrott to get his senior goal so bad
Skipp put in a masterclass and Tanganga put in a shift.
KWP can't be our first choice RB, Wanyama was pretty much nothing in the game, neither was Dier

Our lack of clinicalness got us in the end

Some good signs from Parrott but to be honest he wasn’t helped tonight by those around him – Dele in particular.
Tanganga looks composed and better than Sanchez does.
Let’s see what Eriksen and Son can do.

One fan said that Tanganga looked “composed and better than [Davinson] Sanchez” in the centre of defence.

WhoScored gave Tanganga a decent score of 6.7, higher than fellow debutant Parrott who got a 5.9, but less than Sanchez (7.1) and Eric Dier (8.0), who was rated the best player on the pitch.

Football London awarded both Tanganga and Sanchez a 7/10.

Overall, Tanganga can be pleased with the shift that he put in despite the result. And Colchester didn’t score or have a shot on target in 90 minutes – the problem for Spurs was at the other end.

Dier, Sanchez, Gaz, KWP, Tanganga and Parrott get my respect. But the rest however…

Silver lining from this is that Tanganga is quality. I want to see him in the prem

Parrott and Tanganga were fine. It was some of the senior team members who were awful.

Parrott was uninspiring, Skipp looked uncomfortably when making a 10 yard pass, Tanganga looked ok but overall a miserable night for our youngsters. Quite possibly one of the most depressing games of football I have ever seen. #COLTOT

One fan said it was “quite possibly one of the most depressing games of football I have ever seen”.

The knives were out for Spurs in the media afterwards with some reports claiming Tottenham’s season was “falling apart”.

Some hope for Spurs came from an unlikely source. Former Arsenal player Ray Parlour, talking on the Alan Brazil Show (talkSPORT, Wednesday, 7am) said, “It was an awful result, but falling apart? That’s a bit much at this time in the season.

“It’s a bit of a problem, it’s embarrassing for the fans. The fans in London will all be looking and laughing, I was on the way home last night.

“But that’s football, two wins and they could be right back at it in the Premier League.”

One fan said, “that’s Tanganga and Parrott’s season done” and he could be right.

The Carabao Cup would have been the vehicle for Pochettino to experiment with youth and that’s one of the most disappointing parts of the defeat last night.

It’s also another piece of silverware that Tottenham won’t be winning.

Radio host Alan Brazil concurred with the fan on Wednesday morning (talkSPORT, 7.00am), saying, “These are the players who have been knocking on the door and asking Poch to be involved. Will that have done their chances any good for the future? I don’t think so.”