Hutton: McGinn is the main man

Alan Hutton has claimed that Aston Villa midfielder John McGinn is the “main man” at the club after his impressive start to the Premier League season.

The 24-year-old Scot hit his third goal of the new campaign in the 2-2 draw with Burnley on Saturday, and former teammate Hutton has been quick to hail him for his impact at Villa Park.

Speaking to Football Insider, he said: “He’s the main man for me, honestly I can’t sing his praises enough

“Since the day he walked into the club until now, he has been unbelievable, to be honest. His power, his running, his goals, his attitude, he is top-class and not just that, he is a down-to-earth guy.

“He’s really standing out on his own, he’s such a good player, a massive player for them.” 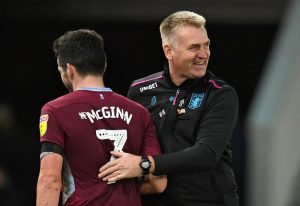 How good has McGinn been for Villa so far this season?

You make a strong argument that the Scot has been his side’s best player so far this term.

Comparing him directly to Jack Grealish, another talisman of Dean Smith’s squad, it’s easy to see just how influential McGinn has been.

His Whoscored rating, for instance, has been 7.6 so far this season – a rating that eclipses Grealish’s 7.06 by some distance and is, in fact, the highest in the entire Aston Villa squad.

Similarly, McGinn has recorded 2.3 successful dribbles per game compared to Grealish’s 1.7, as well as scoring three goals to the skipper’s zero.

Of course, Grealish outstrips McGinn in other areas, with more key passes and more assists, but when you also factor in the 3.3 tackles the Scot has made to his captain’s 1.7, it’s easy to see why he has been such an influential performer is far this term. 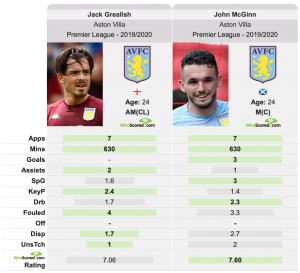 His success has gone beyond simple stats too.

McGinn’s performances have drawn praise from far and wide, with Chris Sutton describing him as “outstanding” on his personal Twitter account, and Jamie Redknapp lauding him as a “£55 million midfielder” during his goalscoring turn against Tottenham earlier in the season, as per the Daily Mail.

As Hutton claims, McGinn has been truly standout for the Villans so far this term.