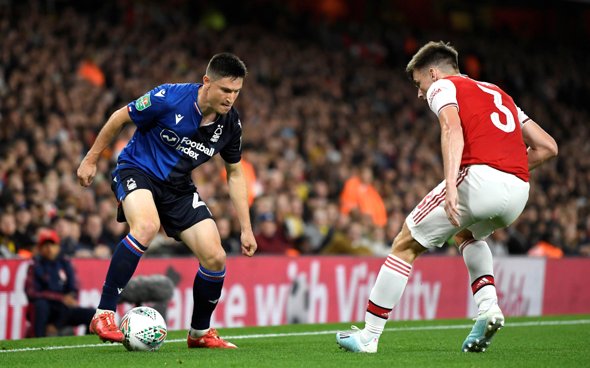 Summer signing Kieran Tierney finally made his debut for Arsenal tonight in the Carabao Cup, after arriving injured from Celtic.

And he was worth the wait according to a multitude of Arsenal fans as they watched their side ease through to the fourth round in a 5-0 win over Nottingham Forest.

Defence has been a problem again for Arsenal this season. They’ve conceded 10 goals already and only one other team has let in as many in the top half of the table (Bournemouth).

Sead Kolasinac has played at left-back for the past three games and has added one assist in that time but there were plenty of Arsenal fans tonight who think they’ve finally found their upgrade.

Here are the best reactions from delighted Arsenal supporters:

Tierney looks so great, can't wait for him to take that LB slot for good. Chambers impressive as well. Bellerin-Chambers-Holding-Tierney actually coming good is the stuff of dreams.

One fan said he hadn’t seen a left-back at Arsenal cross like Tierney before.

The 22-year-old made a reputation for himself up in Scotland, delivering defensively and in attack, and he put in an average of 5.46 crosses per 90 minutes for Celtic in the 18/19 Premiership with a 38.4% accuracy, registering five assists. [WyScout]

That was actually his lowest return for three seasons, with six, eight and six assists for Celtic in the 15/16, 16/17 and 17/18 seasons respectively.

Kolasinac has delivered 3.7 crosses per 90 minutes this season but with only a 15.4% accuracy.

Can I just say … Thank you @CelticFC for @kierantierney1 …

Man like Tierney! Could easily have had two assists already! Wow! The EPL is not ready

One fan said the EPL was not ready for Tierney and another said he was about to become the “PL’s best LB”.

That’s going to take some doing and Tierney has had to play at centre-back and right-back for Scotland with Liverpool’s Andrew Robertson taking the left-back spot.

However, Tierney came highly recommended, with Chris Sutton saying that Arsenal had got him on the cheap for £25m. He said that if Aaron Wan-Bissaka was worth £50m, so was Tierney.

Tierney has already started showing his worth tonight and fans will be hoping he can make his Premier League bow on Monday against Man United.

Tierney is the best LB we have had since Ashley Cole. No question. Could have said that based off his Celtic reputation alone.

Tierney is a joy to watch. What a player he is.#COYG Arsenal all the way. #ARSNOT pic.twitter.com/YN4Jt5mvyt

Well, 45 minutes are more than enough to see that Tierney is pure class. Every decision he makes and every pass he takes just make so much sense. And he's not even 100% fit. Give him the armband, please.