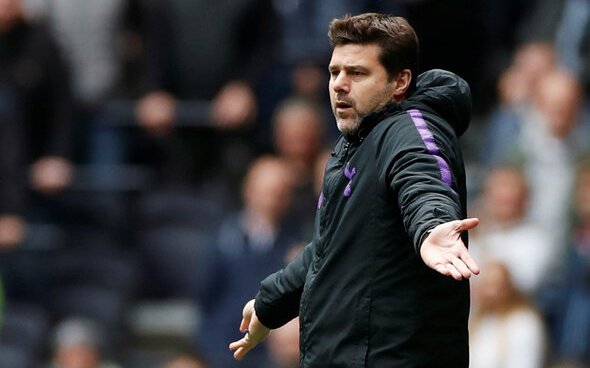 Mauricio Pochettino is risking the wrath of Tottenham fans after it was reported he is thinking of playing either Moussa Sissoko or Eric Dier out of position at right-back in the north London derby on Sunday.

That’s what the Guardian reported earlier this week, with Kyle Walker-Peters expected to miss the game through injury.

It’s a blow for Walker-Peters who has waited a long time for his run in the side. Kieran Trippier leaving over the summer had promoted him to Pochettino’s first choice.

Pochettino also has right-back Serge Aurier at his disposal but he hasn’t played any minutes this season and was dropped from the squad entirely for the past two games.

You’d have been hard-pressed to find Tottenham fans criticising Pochettino previously but there are some supporters who aren’t happy at all at this turn of events.

Aurier had previously said he wanted to leave this summer and with the European window closing on Monday there’s still time for him to move.

However, fans obviously think that while he’s in north London and the team needs him, that he should be played and one went as far as saying, “Poch out”.

Ripped apart sunday thats all in goingto say our back for has gone frm being oneof the best to one of the worst 5 wins out of 20 games is sackable !!!!! pic.twitter.com/QvJyWHhEYq

One fan is doing the equivalent of sticking his fingers in his ears. He can’t believe that Pochettino is thinking of playing either Sissoko or Dier out of position in such an important game. He’s put it down to “paper talk” and thinks Aurier will play. However, the Guardian is one of the most reliable news sources in the UK and it’s not renowned for so-called “paper talk”.

I don’t really get it tbh, his been training everyday with the squad, I don’t really believe it I think he’ll start against u and carry on playing especially with Walker-Peters being injured, think it’s just paper talk, and why would we sell our only good right back????

One fan has another solution, with Jan Vertonghen playing at left-back and Danny Rose moving over to the right – and that makes a lot of sense. Vertonghen started as a left-back and impressed there last season. However, like Aurier, Vertonghen hasn’t played yet this season, with Pochettino playing Davinson Sanchez at centre-back instead.

Some Tottenham fans are fearing the worst against Arsenal and their three-pronged attack of Pierre-Emerick Aubameyang and Nicolas Pepe.

It means that Aubameyang could play on the left and test either Dier or Sissoko, which could tip the balance of the game Arsenal’s way. One fan said, “Forfeit the match. We’re toast”.