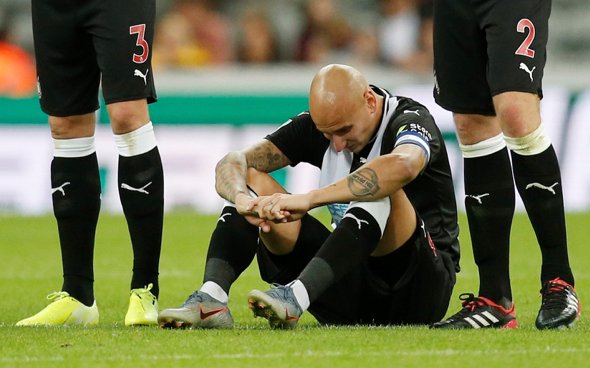 Newcastle will get to concentrate on the league after being dumped out of the EFL cup following a penalty shootout against Leicester on Wednesday night.

The game finished 1-1 after Yoshinori Muto levelled the game following a first-half strike from James Maddison.

Getting knocked out of the EFL cup isn’t the worst thing in the world but the game was damaging to Newcastle in other ways, with potential injuries to Matt Ritchie (looking like ankle ligament damage), Jetro Willems and Emil Krafth.

Former Newcastle player Ayoze Perez had the chance to plunge a knife into Newcastle’s back deep in injury time but he fired over and the game went to a shootout.

Isaac Hayden and Jonjo Shelvey missed the penalties for Newcastle and it led to an apology from Shelvey after the game for his terrible effort.

That wasn’t enough to save him from a savaging from the fans for his overall performance.

He gets away with murder, according to the Sky pundit it was a typical Shelvey performance, lazy, often caught in possession, wasteful passes. The sooner he’s gone the better.

Shelvey is a Newcastle conundrum. Seen as a frustrating player with real talent, Rafa Benitez couldn’t get the best from him and this fan has had enough. Words like “lazy” and “wasteful” are strong and he wants him gone from the club.

2/2 Gayle and Carroll can be fit. Shelvey showed why he was left out on Sunday, needless foul to give free kick away, lost ball as last man lucky they didn’t punish us. Couple of Hollywood balls didn’t come off. Don’t get me wrong good squad player but needs to improve #NUFC

The best Shelvey got last night was from the fan who said he was a “good squad player”. Shelvey is praised for his passing ability – something that got him in the England set-up – but his actual stats don’t make for great reading. According to WyScout, in the 18/19 season he only had a 76.9% pass success rate, dropping to 50% for long passes.

Shelvey washed up and the best natural playmaker we have. Dark times ahead this season indeed. #CarabaoCuponQuest #CarabaoCup #NUFC #ToonArmy

Bit of a nothing game, Matty Longstaff did well. Was like a pre season friendly. Shelvey, liability gives ball away then gives the foul away for the goal. Willems dives like Tom Daly. Out of the cup again. Move on. #nufc

Time to move Shelvey on imo. Not that we’ll spend the money we get for him. He doesn’t fit into this team. #nufc

Really think the starting CM’s should be Hayden and Longstaff. Shelvey just never looks like he can be arsed, that pen was bloody awful aswell #nufc

Shelvey just isn’t very good is he? I’d be selling him in January #NUFC

A few other fans called for the club to move Shelvey on, although one added, “Not that we’ll spend the money we get for him. He doesn’t fit into this team.”

Newcastle did okay without him last Sunday when they beat Tottenham 1-0, Steve Bruce’s only win of the season so far.

The next game is a big one and while it might be early to call it a six-pointer, it is bottom (Watford) against second-bottom. These fans would be happy to see Shelvey on the bench again.